Zeppelinesque hammer of the gods

Goat, Liar, Shot – now Book. Austin punk's Adam and Eve, its Sex Pistols and Clash – the Dicks and Big Boys – begat armies of snarling acolytes blurring the line between first wave rage (Sharon Tate's Baby, Toxic Shock, Jerry's Kids), and post-punk (Butthole Surfers, Scratch Acid). From those latter loins rose the Jesus Lizard, and as this Good Book pinpoints without meaning to do so, the epitaph set down by this hybrid biography/oral history/coffeetable picture tome coalesces into another single word brand: Zeppelin. Starting with frontmaniac David Yow's opening auto-essay – all four bandmembers' beginning statements foundation Book – wherein one of his seminal life-music moments becomes hopping a bus in Austin to see Led Zeppelin at the Houston Summit in 1977 (for $9.85), a thread of that other Fab Four snakes oh-so-subtly through this riveting history. A plethora of witnesses contributing awestruck appreciations of the band, from producers (Albini), peers (Watt), and fellow live sledgehammers (Picciotto), compare this Austin-hatched reptilian force of nature to the classic UK leviathan. Even then, TJL lawyers, road managers, and girlfriends give as good if not better than celebrant contributers in rendering an image as singular as the oblong shape of this thick document designed by Yow. Not even my own contribution can befoul this beast. 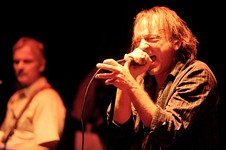