Some heads are gonna roll at Fun Fun Fun Fest 2014 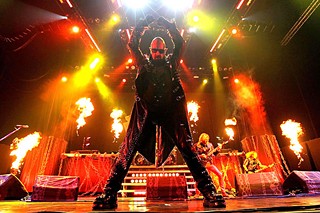 I'm already slipping on my spiked arm gauntlets in anticipation for heavy metal pioneers Judas Priest, whose leather-daddy lead singer, Rob Halford, hasn't ridden his Harley onto an Austin stage since 1988, and decorating my mug with black and white grease paint in excitement over seeing King Diamond, a Dallas resident who hasn't toured the U.S. since 2005. Of course, the annual genre-music gathering isn't all vintage metal acts.

"Yes, by far," he nodded. "It's one of the most legendary hip-hop records ever."

No surprise that Austin's music fest market remains crowded and competitive. FFF fought for reunited Minneapolis jangle rockers the Replacements, but was beat out by ACL Fest. Similarly, we have it on good authority that October's Housecore Horror Film Fest was intent on landing King Diamond. Dog eat dog.

Moody and chief booker Graham Williams indicated that, just as Public Enemy helped persuade Run-DMC to sign on to the fest in 2012, Slayer convinced Priest to play this year. Evidently, their reputation precedes them. Still, it's the festival's standing with its fan base that concerns organizers.

"Our core audience are people in the scene, like ourselves, who are the most judgmental, opinionated, and elitist when it comes to music," admits Williams. "We're all waiting for an excuse to talk shit about someone or hate on some lineup. That's why we're always thinking, 'What will people not hate?' as much as, 'What will people really love?'"

Whatever works. This is FFF's best lineup since 2011. 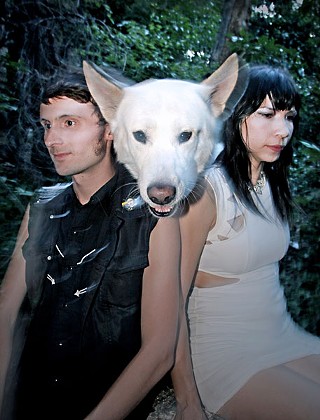 Jonny and Carley Wolf sit on opposite sides of a picnic table, interrupting each other as they recall meeting backstage at a music festival.

"That's when she fell in love with me."

"It was love at first sight."

"Took him a while to win me over."

The young husband and wife, who together complete the fuzzed-out swamp stomp duo Ghost Wolves, are on Cheer Up Charlie's patio, waiting to perform. Their giant, wolf-like, white dog, Winter, has amassed a small crowd of new friends ready to pet. It was his grandfather, Ice, the alpha of Carley's family pack in Fredericksburg, who died around the time the band began and thus inspired the band's moniker.

"I saw Ice's ghost," Carley offers. "We were walking back from his grave and a fog rolled in and all the dogs started howling and the horses were running around like crazy. I turned around and saw his form, standing in the fog. It was amazing."

She strokes her arm. "It still gives me chills."

Consider Winter a third band member who tours with the couple, receives gifts of chicken legs from club owners, has his own fan club, and occasionally has to be snuck into hotels wearing a trench coat. Ghost Wolves formed in 2010, three years after its frontline met and two years before they got married. They'd grown tired of being divided by separate tour schedules and aching to experiment with the southern sounds of Hasil Adkins and Jessie Mae Hemphill.

The duo's debut LP, Man, Woman, Beast, which hits stores next week, has style for miles, howling with speaker-slashed slide guitar tremolo and limber drum beats that lay a dark pallet for their campy, seductive, and ultimately catchy songwriting. Carley's helium voice proves the definition of wolf-in-sheep's-clothing, sounding so innocent as she sings about handguns, the devil, and castration.

"I just get in these moods," she giggles.

Catch Ghost Wolves at their record release show on Saturday at Holy Mountain and at their Waterloo Records in-store on Memorial Day, 5pm. 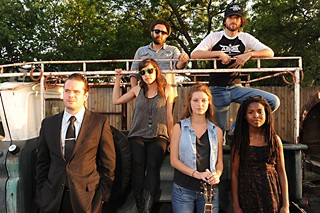 Six local musicians are being sent to Canada next month to represent Austin at Toronto's North by Northeast festival. The "ATX6" are indie pop songstress Dana Falconberry, East Cameron Folkcore singer Jesse Moore, blues guitarist Mrs. Glass, ambient folkie Aisha Burns, Americana badass Leo Rondeau, and country songwriter Carson McHone. Devised by Austin Independent Radio's Chris Brecht and financed by local venue and media sponsors, with insitutional help provided by the city of Austin's music office, the opportunity offers the group, four of whom have never performed in the Great White North, exposure at a NXNE showcase. "We wanted this to be a golden opportunity for deserving, hard-working Austin musicians who wouldn't otherwise play NXNE," said Brecht. Another local band, Spoon, headlines the music conference, held June 13-22, but they didn't get charity tickets. No word on whether Toronto's mayoral party animal Rob Ford, who's shown interest in Austin music and rock in general, will attend.

› Last Thursday, City Council unanimously approved designating the area at Third and Nueces "Margaret Moser Plaza." The Chronicle queen giggled with excitement as Kevin Russell, Charlie Sexton, Jon Dee Graham, and Chris Masterson walked her in with Doug Sahm hit "She's About a Mover" at the surprise ceremony. "I came in through the back door," Moser told friends. "So whenever I get invited through the front door, the first thing I do is run to the back door and see who I can let in."

› While driving home from a Pflugerville gig Saturday night, local rockers Vallejo collided head on with a motorist driving the wrong way on I-35. Frontman AJ Vallejo broke his wrist, but the band was largely unharmed, thanks to seatbelts and airbags.

› The day before Ume opened for Cheap Trick at Emo's, frontwoman Lauren Larson was summoned to San Francisco to join Heart's Nancy Wilson at the Fillmore. The local sang lead and soloed on Neil Young's "Hey Hey, My My," headbanging despite it being an acoustic performance.

› Barefoot thrashgrassers Whiskey Shivers won't likely change their name to Orange Liqueur Shivers, though it's rumored that, on Wednesday, they performed in a commercial for Grand Marnier.