When the Clock Strikes 12 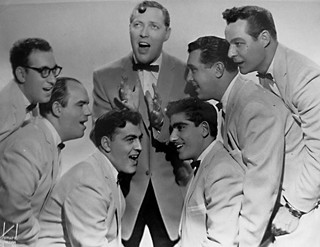 In 2007, Pete Best performed Downtown on the outdoor stage of Threadgill's World Headquarters. You of a certain age remember the drummer – the Beatle who wasn't John, Paul, George, or Ringo. The Liverpudlians' initial backbeat, 1960-62, he'd been a handsome devil as a young man and remained fit for the 45 years that followed, playing songs he'd performed and recorded with the band.

He had mastered his craft in Hamburg with the leather-wearing rockers by the time he was fired on the cusp of the group's meteoric ascent. In Austin, after the show, he conducted a congenial meet and greet, posing for pictures with fans and signing posters. Murky reasons given for his exit from the Beatles became a poignant reality while watching him work the crowd of a couple hundred. What's it like to stand within a hair's breadth of unimaginable success, completely shadowed by circumstance?

That's impossible, of course, since Haley died on February 9, 1981, seven months before the Austin Chronicle's debut issue. Unlike Best, Haley did taste success, yet he died in South Texas – Harlingen – haunted, embittered, and neglected. The man who cut the first rock & roll single to top the Billboard charts and sell a million records wasn't even inducted into the Rock and Roll Hall of Fame's inaugural class five years later.

Worse, Haley bought into the pointless argument of who invented rock & roll, believing he deserved the title. He had a legit claim, too, having recorded the genre's first bona fide anthem, "Rock Around the Clock." The other firsts he deserves credit for have been marginalized along with his memory.

When the Clock Strikes One

It was a double rim shot heard round the world, followed by Haley's famous count off, "One, two, three o'clock, four o'clock rock," and it very nearly faded into obscurity.

As the B-side of "Thirteen Women (and Only One Man in Town)," the song, "(We're Gonna) Rock Around the Clock," first charted in early 1954. The single didn't reach No. 1, but its bluesy jump beat attracted the attention of teens bored with their parents' Benny Goodman and Frank Sinatra records.

Late that same year, while visiting the home of actor Glenn Ford, film director Richard Brooks was handed some 45s from the collection of the actor's teenage son. Among the titles that caught Brooks' ear was "Rock Around the Clock" by Bill Haley & His Comets. This tune, decided the filmmaker, fit his new feature about inner-city kids in high school, The Blackboard Jungle, starring Glenn Ford.

After a cornball intro about juvenile delinquency set to light, jazzy drums, the movie title splashed across the screen. "Put your glad rags on and join me, hon," invited Haley, and join him they did – by the millions. "Rock Around the Clock" leapt off the screen and onto record players, radios, and jukeboxes like nothing before. Prior to his death in 1993, iconoclast Frank Zappa often cited the film's debut in March 1955 and the effect of "Rock Around the Clock" on young theatregoers.

"I didn't care if Bill Haley was white or sincere," declared Zappa. "He was playing the teenage National Anthem and it was loud. I was jumping up and down .... [Although the film] had the old people winning in the end, it represented an endorsement. 'They have made a movie about us, therefore we exist.'"

After the success of the film, Bill Haley & His Comets signed on to tour with "The Biggest Rock & Roll Show of 1956," the only white act on a bill that included the Platters, Drifters, Bo Diddley, Big Joe Turner, LaVern Baker, and Frankie Lymon & the Teenagers. The latter finished the first half, and the Comets closed the second to wild applause and dancing in the aisles.

In 1957, the band stormed England the way the Beatles would take America in 1964. Across the Atlantic, riots and mayhem followed Comets' gigs, English newspapers crowing headlines like, "1,000 Crazed Teenagers Jive Down Main Street After Cinema Riot," while politicians decried "rock & roll hooliganism." Down under, 300,000 Australians greeted the Yanks with signs reading, "The King Is Here!" Haley & His Comets rocked around not just the clock, but the world.

For starters, they were a pro outfit. The Michigan-born Haley led Western swing bands beginning at the age of 15. As Bill Haley & the Saddlemen, he recorded Jackie Brenston's "Rocket 88" in 1951 and "Rock the Joint" a year later. By 1953, the Comets' "Crazy Man, Crazy" laid the groundwork for "Rock Around the Clock." He followed it with "Shake, Rattle and Roll," paying tribute to Big Joe Turner. In 1956, he popularized "See You Later, Alligator" in the American lexicon.

Besides forming the first rock & roll band, the Comets, and earning the first gold record for a rock & roll song, Haley also ruled as the first bandleader to write and publish his music. In other words, he reached the national charts with music he wrote and recorded, cashing in by owning his own music publishing company and record label. Although he was the first white artist elected as the "Rhythm & Blues Personality of the Year," he preferred to call himself the father of rock & roll. 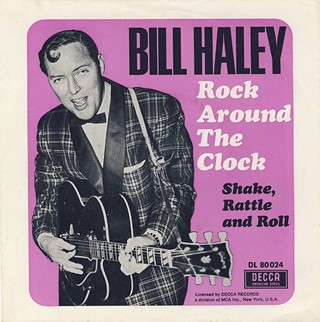 Veteran music critic John Swenson qualified the self-coronation by subtitling his 1983 Haley biography "The Extraordinary Life and Career of the World's First Rock & Roll Idol," which falls in line with the fact that after triumphant international tours in 1957, Haley arrived back in the U.S. to little fanfare and a usurper to his throne. By then, Elvis Presley had racked up nine No. 1 smashes, his smoldering visage decorating new novelty publications aimed at teens, such as 16 Magazine (revisit "Dreamsville," Nov. 30, 2007). The iconic "Million Dollar Quartet" photo of Presley, Johnny Cash, Jerry Lee Lewis, and Carl Perkins debuted in 16.

For all his meteoric rise and worldwide following, Haley now trailed behind Presley and the new crop of slick young singers. His trademark kiss curl looked dated and he'd never been especially photogenic: tall but schlubby, introverted, shy about his blind eye, married, and generally looking and acting square in a world of Brylcreem pretty boys like Ricky Nelson. And just when media began focusing on rock & rollers, Haley backed away from press. His next recording projects of hopped-up international folk songs were followed by a country album that stiffed.

It didn't help that the IRS had its hand out for back taxes; managerial mishandling of finances soon forced Haley to close his publishing business. German author Otto Fuchs' recently reissued book, Bill Haley: Father of Rock & Roll, suggests that by that time, "Since record sales had fallen in the [Sixties], the band increasingly depended on income from live shows."

Bill Haley & His Comets still enjoyed a modicum of popularity as a nostalgia act, playing two-week engagements at nightclubs like San Antonio's Tiffany Lounge in 1964. Yet, the frontman preferred playing outside the States where taxes were more forgiving. He especially liked the way Mexico felt so laid-back and how its people embraced him and his music.

Bill Haley's career wasn't over, but important parts were breaking down. His first marriage went down the drain when wife-to-be number two turned up pregnant. By the time he relocated to Mexico in 1961, that marriage foundered as well. When Haley reluctantly found himself paired onstage with an attractive Latina singer named Martha Velasco, the third time proved to be the fabled charm.

His band introduced the Twist dance craze to Mexico as the Beatles invaded America. Films, concerts, and recordings for the Orfeón and Dimsa labels meant that the Seventies began well for Haley, particularly when the American Graffiti soundtrack made "Rock Around the Clock" quintessential. Haley re-recorded the single in 1974 for use on a new TV show, Happy Days, and the song climbed the charts with that irresistible double rim shot one more time.

Dates and recordings south of the border, plus European tours, kept him busy through the decade. In 1979, Haley played a Royal Command Performance for the queen. This came as no surprise, for he long remained a favorite in England, especially among the Teddy Boys, who'd followed him since the Fifties.

Call it the Big in Europe syndrome, but here's a provocative thought espoused by Otto Fuchs:

"Rockabilly veterans such as Charlie Feathers, Johnny Powers, Mac Curtis, Johnny Carroll, Hank Mizell, etc., who are footnotes in the rock & roll history of the U.S., were rediscovered at first in Britain, then in Continental Europe during a great rockabilly revival in the 1970s. [They became] household names in Europe, paving the way for rockabilly revivalist bands such as the Stray Cats, Polecats, and Jets.

"Maybe we Europeans see them as people who brought social liberty to our shores."

Some of the mystery of Haley's erratic behavior in the final years of his life has been explained.

For "Falling Comet," Austinite Michael Hall scored the first interview ever with Haley's widow Martha in 2011 for Texas Monthly. The Wild Seeds' frontman characterized Haley as deviled by drink, paranoia, and the ghosts of his former success. Hall's description of Haley's contradictory behavior, where he'd sit in a Sambo's restaurant in Harlingen drinking coffee and humming "Rock Around the Clock" for attention, resonate painfully as true:

"After a while, he'd start to shift in his seat and look around. ... He was giving people around him clues. He wanted people to hear him and say, 'You're Bill Haley, aren't you?'"

Other times, he'd relay angrily that he wanted to be left alone.

Had Bill Haley lived past 1981, he would have seen the Eighties rockabilly revival in full swing, and perhaps enjoyed some well-deserved time in the spotlight once more in the new video age of MTV. By 1980, however, he'd alienated his third wife Martha with erratic behavior; she took their three children and left. Haley moved from the house into their garage apartment, where he spray-painted the windows black and spent his evenings drunk-dialing friends with conversation that was alternately belligerent and sentimental. That's when he wasn't drunk-driving his Continental into the darkness and collecting DWIs.

Who knows what demons encroached on Haley's battered mind that final night in Harlingen, before a friend found his cold body the next day. The night before, he'd called his sons from his second marriage, both insulting and cautionary. They'd been through the conversation many times before, listening to their father's preposterous tales of military service and stint as a deputy sheriff.

The funeral starred Bill Haley's final appearance, in an open casket with his hair groomed in the trademark kiss curl. The shy man whose music once galvanized youth into rioting now lay silent, at peace. All that was left, besides the six dozen people in attendance, was fading memories of glad rags, fun 'til the clock struck one, and a double rim shot.