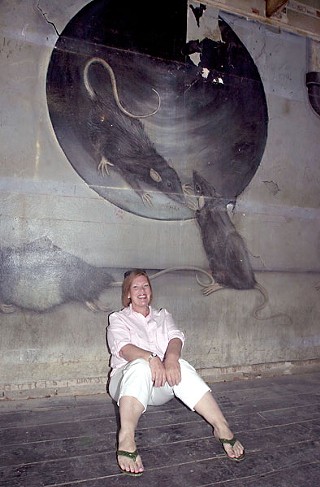 Moser in front of the iconic mural from Austin's birthplace of punk, Raul's, 2008 (photo by John Anderson)

It's every writer's dream to be something more than a messenger. To create something better than ink on a page that deteriorates as breaking bulletins become old news. We want to inspire, preserve – matter.

With her rumination on Bill Haley, Margaret Moser's filed her last story as a staff writer for the Chronicle.

A fixture of the local music scene since the mid Seventies – as a groupie, backup singer for rock scoundrel Dino Lee, organizer of the Austin Music Awards, and scribe for the Austin Sun and the Chronicle – Moser remains inseparable from our city's musical landscape. Her celebrated exit, a love-in rather than a victory lap, began in March at her final AMAs, where she enjoyed a last dance with the Texas Tornados, Jimmie Vaughan, and an entire stage all but bending under the weight of the Austin music scene. A couple of weeks ago at the Continental Club, her retirement party launched with a performance from local Hall of Fame cowpunks the Hickoids and landed with a surprise set from light rock luminary Christopher Cross.

Even without ZZ Top frontbeard Billy Gibbons making a surprise appearance, those live bookends demonstrate the spectral range of artists Moser supported in her long career.

Margaret and I met fall 2011 at Planet K. She'd come in candle shopping and I was playing a compilation of vintage punk called Bloodstains Across Texas. We got to talking about the Nervebreakers and she corrected my assertion that they'd opened for the Sex Pistols in our sister city (revisit "Holiday in San Antonio," Jan. 10, 2013). No, she said, they opened the Dallas show.

She was right, of course. I was talking to an authority on early Texas punk. Somewhere in our discussion of Austin bands and her recent Gourds cover story, I confided my aspirations of being a writer who didn't have to publish all of his own work. Months later, she wrote about that experience during her reluctant second-run of doing the Chronicle's Music news column, "1-2-Tres-Quatro!"

"The clerk turned out to be remarkably intelligent about music, and I dallied in conversation with him over the carved skull pipes," she wrote. "Not only was he predictably much more knowledgeable about contemporary music than I, he was also very interested in Texas vintage rock history.

"He also had a mustache that would need shaving very soon."

By taking a chance on an unknown writer with a regrettable handlebar mustache, Moser gave me the opportunity to realize my dreams. Without her, I wouldn't be where I am today – and I'm not the only person for whom that's true.

Moser's long held a maternal role in the music scene. In what probably comes from her being the eldest of four children in a home split by divorce, she holds a strong sense of family and looks out for the youngsters. It was Moser who first championed Charlie Sexton and Monte Warden when they were barely teens; who saw greatness in the young duo of Gary Clark Jr. and Eve Monsees; who wrote about Mother Falcon while most of the members were still in high school; and who championed Residual Kid way back in 2011 when they split from fellow teen hopeful Grace London.

"Down in San Antonio, I get asked a lot what I've done in Austin and if I had kids," Moser told me on a recent afternoon where we ate tacos and drove around looking at bygone music haunts. "I tell them, 'No I didn't have any kids, but I raised a couple decades of writers and musicians.'"

Those maternal instincts were evident even in her much reputed groupie days. She'd mommy around her gang of vixens, the Texas Blondes, and actually hold meetings before they went out, educating the girls about that night's band and playing their music.

"We took the bands shopping, washed clothes, and showed them our favorite enchilada places," she says seriously. "I always considered us a civic group or welcome wagon more than any of the stereotypes people choose to apply to it."

Moser's groupie experiences gave her the confidence – and access – despite never having completed high school, to become a music journalist. Over 33 years at this paper, Moser's worn many hats (mostly fezzes): receptionist, gossip columnist, proofreader, food editor, book editor, staff mom. Above all, she's been known as a loving music writer.

Last fall, Moser, 60 on the issue date of this very Chronicle, received a grim cancer diagnosis. I still cringe when she uses the term "Stage 4 death sentence." She lightens the mood by quoting actress Valerie Harper: "I'm terminal, but not today!"

"And that's really the way I feel," she chuckles. "I have more good days than bad days, and the bad ones really suck, but the good ones I can do whatever I want."

These days, what Moser wants lies in one of the cities of her youth, San Antonio, where she's making a home and history at the South Texas Popular Culture Center, which the San Antonio Current recently named "Best Unique Attraction." And she wants to be clear: While the traffic and prices of new Austin have driven her south, Austin's where her heart is.

"C'mon, I love Austin," she smiles. "Why else would I have lived here so long?"

Margaret Moser's dedicated her life to local music and, in retirement, will enjoy a legacy beyond that of reporter. She's a leader in our community. As such, there's a surprise in store for her, so meet us today (Thursday) at Third & Nueces, 5:30pm.

› Two days after Mike & the Moonpies' triumphant return to the White Horse, where they played to a packed dance floor and were joined onstage by What Made Milwaukee Famous frontman Michael Kincaid for a boozy rendition of Hank Jr.'s "Whiskey Bent and Hell Bound," bandleader Mike Harmeier exited his room at La Quinta in Dallas on Sunday morning to find the band's van and trailer, containing all their gear, had been hijacked. Harmeier says the generosity of his fellow musicians has been overwhelming and they'll maintain their busy tour schedule on borrowed equipment. An online fundraiser had brought over $15,000 in donations at press time. Visit the band's Facebook page to see a complete list of missing gear.

› An estimated 5,200 Latin music fans flocked to Fiesta Gardens on Saturday for Pachanga Fest, up 30% from last year, according to founder Rich Garza. The largest draws of Pachanga's non-traditional lineup, which ranged from Puerto Rican garage rock to Andean dub psych, were Mexican-American songbird Julieta Venegas and rowdy Monterrey rock/ska/rap crew El Gran Silencio. Garza characterized the growing fan demographic as the Chronicle/KUTX crowd and the El Mundo/Latino 102.7 contingent. "That's an interesting mix of people to bring together for a party," he offered. Garza scaled back his annual Latin gathering this year to a single-day event.

› Ume announced this week that, after three years with the band, Rachel Fuhrer would soon relinquish her drum sticks to Aaron Perez, whose colossal drumming can also be heard in folk orchestra East Cameron Folkcore and alternative math-rockers Boyfrndz. He says he plans to remain in all three bands.

› Austin's synthesizer superstore, Switched On, will relocate to larger digs at 2400 E. Cesar Chavez. The specialty shop and repair service has outgrown the small storefront at on East 11th its held since opening in 2010. A synth mecca boasting an eye-bugging selection of keyboards, effects modules, drum machines, and other electronic musical tools, Switched On is a popular attraction for bands touring through Austin. Increased square footage will allow the business to consolidate, and they'll resume hosting classes and workshops. Visit their new storefront June 1, with a grand opening party on June 7.