Headhunters shuts down, Psych Fests both successful and contentious, and Wayne 'The Train' Hancock recuperates while Sons of Fathers call it a day 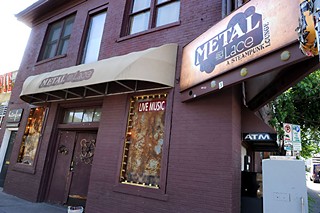 Austin's rock dive population dropped last week when Headhunters closed without notice. Owner Steve Ricci declined official comment, but acknowledged he's scouted no less than nine locations in which to reopen the business. The two-story building at 720 Red River, which the county tax collector last appraised at $394,308, was purchased by ubiquitous local real estate investors World Class Capital, whose CEO, Nate Paul, indicated he's keeping his options open as far as what kind of business will move into that space. A source close to Headhunters tells "Playback" that Ricci was fighting to keep his lease despite the change of ownership.

Headhunters, also known as Metal & Lace, rarely brought in big music names, instead booking a mishmash of lesser known locals, unstylish San Antonio bands, and acts no other venue would touch. Still, it had its moments in recent years, like the semi-nude go-go dancing of Ta-Ta Tuesdays and a roster of solid regulars like Izzy Cox and doorman Houston Richardson's eternal punk band Brewtality Inc.

Three years ago, new to town and occasionally playing on the cat-piss-soaked stage for $30 split between five guys, I'd marvel at the staff. Legendary loudmouth Billy Milano of M.O.D. would be working the door with a fat cigar hanging from his craw while Scott Reynolds, preferred vocalist in Descendents spin-off All, stood behind the bar. These were real rock & roll singers – both of whom I'd paid to see perform in my formative years – taking out the trash at Headhunters. What a joint!

Ricci became notorious for conflicts and cockroaches when Spike TV's Bar Rescue attempted a Headhunters makeover in 2012 with disastrous results. Still, he deserves respect for the Herculean feat of keeping a grimy music venue open Downtown for over a decade. Roaches, I guess, are hard to kill. 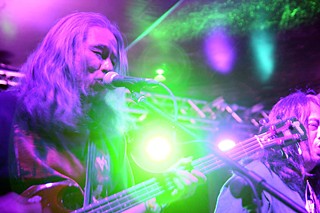 Seven proved to be the lucky number for Austin Psych Fest. Last weekend's three-day event, organized the by the Reverberation Appreciation Society, peaked in attendance this year, topping out at 5,500 on Saturday, including 4,500 paying customers, compared to last year's 3,200. Festival co-founder Rob Fitzpatrick reported that the number of out-of-state and international ticket purchasers remained stable, while local attendance improved drastically. Little argument exists now as to what Austin's third most popular outdoor music festival is.

For the second consecutive year, APF occupied the expansive Carson Creek Ranch, idyllic with ample parking – unheard of for a local festival – and a centralized-yet-rural location, though extreme dust made past ACL Fests feel springlike by comparison. Fitzpatrick acknowledged that, along with a recent lack of rain, the ranch being used the previous weekend by Euphoria Festival contributed to the dustbowl that even extra water trucks couldn't temper. Nonetheless, Fitzpatrick expects APF will return to Carson Creek in 2015.

A local musician is experiencing extreme international blowback over a botched music festival in Germany.

Love's alleged treachery begins with the initial BPF concert poster, which resembles a Hill Country Fare version of Austin Psych Fest and is promoted by his Space Gaze Order of Infinite Light, similar to APF's Reverberation Appreciation Society. Of the 45 acts announced on that bill, reportedly only 18 appeared on the event's finalized lineup.

The festival's headliner, UK's Telescopes, pulled out early because Love couldn't guarantee travel accommodations, but according to band member Dave Rusty Gryphon, he continued to promote them as performers, selling tickets for €60 each, then, in retaliation for them not playing, messaged them a photo of a dog's erection. Another band, the Wands, told "Playback," "We dropped off because our name was being used to bullshit people."

With a depleted lineup and a change of venue to a smaller club, consumer confidence tanked and ticket purchasers like Paris resident Tuan Vu requested their money back. "I wanted to go there as a fan of psychedelic rock," he recounted. "Then I wanted a refund when the lineup changed, but organizers never responded to me."

One artist that played the festival, Laro Basterrechea of Madrid's Holy Science, described Love's unaccountable management: "After the gig, we asked him for the money and he said there wasn't any left. We know he paid some bands, not many and not much. The situation got very tense and he called the security guys for protection. Finally we decided that to beat him up wasn't worth it and left."

In a recap of Berlin Psych Fest from UK website Faroutmagazine.com, which described the event as half-empty, another band, Psychedelic Trips to Death, notes that Love summoned security on them when members attempted to be paid. In the wake of all the controversy, the Berlin Psych Fest Facebook page has been deleted. Robbie D Love, who also produces the local series Psychedelic Light & Sound, declined an interview for this story.

› Sons of Fathers are now on hiatus. Bassist/vocalist David Beck explained that the rigors of the road and the trappings of the music business were causing the local roots band to become disillusioned. "Chasing the ever-fleeing dragon of success was not worth losing the ones closest to me," he offered. "It was not worth sacrificing honesty, good morals, and the original love for music. We would not become one of those bands putting on an act just because the wheels were still moving." Beck's counterpart, guitarist/vocalist Paul Cauthen, admits he'll miss their brotherlike harmonies. "Nobody's gonna sing with me better than David and nobody's gonna sing with David better than me." SoF leaves fans with a parting gift: a new LP they finished tracking this week.

› "A lot of musicians want to be baseball players and a lot of ballplayers want to be musicians," muses Reckless Kelly's Cody Braun. "The results are usually entertaining." The local alt-country band hosts its sixth annual Celebrity Softball Jam at the Dell Diamond on Sunday. The game, 1pm, pits two teams of celebrities, athletes, and musicians against each other. Afterward, RK hosts a 21-act concert including performances by Randy Rogers, Wade Bowen, Turnpike Troubadours, Charlie Robison, and Shinyribs. To date, the Jam has raised over $150,000 for local little leagues. This year, proceeds go to the renovation of Mabson Field on East 12th Street, which had its new Astroturf surface unveiled on Monday.

› Wayne "The Train" Hancock remains laid up in a Denton area hospital after a motorcycle wreck on April 27 that collapsed his lung and fractured his elbow. With tunes like "Neon Signs and Thunderstorms" and "Driving My Young Life Away," the golden-voiced countrybilly songwriter has cranked out some fine highway balladry, so perhaps the accident will serve as inspiration for another classic ode to the road. According to updates on his Facebook page, Hancock has been taken off a ventilator and might return home this week. All shows through June 9 have been canceled, but Whiskey Shivers percussionist Joe Deuce, who came up playing upright bass in Hancock's band, says his former employer's too stubborn to stay off the road for long. 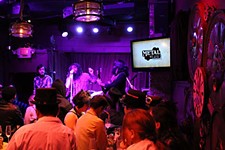