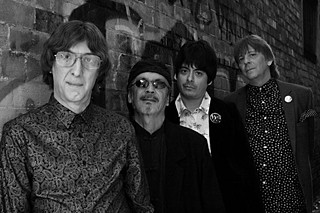 "We're still shaking our heads saying, 'How the hell did this happen?'" acknowledges Cyril Jordan. "I keep asking myself, 'Why now?'"

The veteran guitarist, singer, and rock & roll true believer pauses to consider the current resurgence of the Flamin' Groovies, a scrappy cult combo he's led in various incarnations since the mid Sixties, and which he'd laid to rest in the early Nineties. For starters, the group's participation in Psych Fest is ironic in light of the fact that, when they started in San Francisco in 1965, their R&B-inflected rock & roll – as manifested on early LPs Supersnazz, Flamingo, and Teenage Head – was the antithesis of the acid-fueled excess that would soon dominate the local scene. By the time the Groovies reemerged with 1975's now classic Shake Some Action, Chris Wilson had replaced original frontman Roy Loney and they'd adopted a punchy jangle-pop sound.

The current Groovies lineup – Jordan, Wilson, original bassist George Alexander, and new drummer Victor Penalosa – convened last year after Australia's Hoodoo Gurus invited the band to join them on tour Down Under. Those shows were so well-received that the reunion continued with successful gigs in England, Japan, and America.

"In the old days," he says, "everything the Groovies did was kind of a struggle. Now people are coming to us. It definitely feels like a vindication."

In addition to working on a new studio album, the foursome plans to follow its current U.S. tour with several weeks of dates in Spain and France, followed by more touring in America.

"It feels like we're back on track, so we're just rolling with it," Jordan asserts. "We're gonna gig as much as we can and put out as much music as we can, and we'll see how far it takes us."