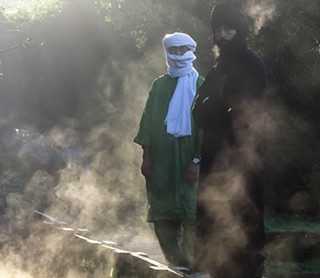 Exiled from Northern Mali by civil unrest and an Islamist insurgency that effectively outlawed their music, desert blues troupe Terakaft brings its Saharan homeland to every performance.

Terakaft means "caravan" in Tamasheq, one language spoken by the Tuareg people. Formed in 2001, their stylistic resemblance to Tinariwen is no accident. Guitarist Liya Ag Ablil, better known as Diara, co-founded the group in 1979. His nephew, guitarist Sanou Ag Ahmed, couldn't help being influenced.

"The first music I heard was traditional Tamasheq music," writes Ahmed via an email translator. "Girls playing tinde [Tamasheq drums] with camels around. But in fact the first music that hit me was the music from Tinariwen."

Clean, hypnotic fluidity is the primary characteristic of his picking style. As Diara keeps the rhythm, Ahmed summons evocative, full-bodied tones with no pedal trickery in sight. Call-and-response vocals delivered in steady cadence add to the mesmerizing atmosphere. Although it's easy to draw a line from Terakaft to early electric blues, their music evolved without firsthand knowledge of the form.

"We call our music assouf, which has a meaning that is not far from blues," explains Ahmed. "But we never heard of American blues before. All the tapes that we could listen to in Africa were rather pop or reggae, or mainstream."

He also notes the influence of regional musical idioms.

"Part of our music comes from the sound of electric guitar," he says. "It sounds like blues, but another part is also coming from a northern part of our desert and could sound like Adalusian music."

"Our music has not changed. We want to bring it to the dance floors."