Rodney Crowell moves forward through his past

"It was the hippie Shangri-La, it truly was. I lived on Enfield Road, but there was Lake Travis and Barton Springs and there was sunshine. And I was young."

Rodney Crowell recalls living in Austin for a few months in 1974 with a sly, you-had-to-be-there grin, though at first he can't remember why he returned to Nashville.

"Oh, I don't know," he drawls slowly as he looks away in some distant memory, pauses, then lets out a hefty laugh. "I do know! Townes [Van Zandt] was fucking my girlfriend. Well, that was part of it, but I said, 'I'm out of here.'

"Austin was good. It didn't cost a lot, and the light was on. KOKE-FM was on, and hippie girls were pretty. I'd just been double-timed by this girl in Nashville, so I moved to Austin. Then Emmy came through and played the Armadillo."

Crowell, alighting from Nashville and the new circle of early-Seventies songwriters that developed around Guy and Susanna Clark (see "We Were From Texas," July 19, 2013), took a chance on Austin's nascent cosmic country scene, but two months after arriving, Emmylou Harris recruited him to sit in with her band for a show.

"She doesn't remember this, but I remember this clearly," attests Crowell. "She said, 'Hey, I got an extra ticket. You want to go to L.A. tomorrow?' I said yeah, it was first class. Back then, you could travel on someone else's ticket, so I went to L.A. and stayed for seven years. Literally, just like that.

"One night sitting in with her at the Armadillo, and the next day I was headed to L.A."

Last year reunited the two on Old Yellow Moon, which culminated in January's Grammy for Best Americana Album. This week, he releases his first solo LP in six years, Tarpaper Sky (see "SXSW 2014 Records," March 14), which continues the 21st century resurgence of one of Texas' best songwriters. Both follow his 2012 collaboration with memoirist Mary Karr on the vastly underrated Kin and publication of his 2011 memoir, Chinaberry Sidewalks (see "Phases & Stages," Jan. 28, 2011).

In fact, the autobiography serves as catalyst for Crowell's creative rejuvenation. Following his mother's death in 1998, he began revisiting his parents' tumultuous marriage and his own poverty-stricken Texas upbringing. In that process of recollection, Crowell discovered a new focus and passion.

Chinaberry Sidewalks opens on New Year's Eve 1955, in a run-down East Houston shack with 5-year-old Crowell watching his parents drunkenly celebrate with neighbors. He senses the trouble brewing as his father becomes bolder and his mother increasingly indignant. Their only child already knows the pattern of abuse to follow.

With no bedroom to wait out the storm, Crowell retrieves his father's .22-caliber rifle, returns to the living room, and whether startled or simply unaware, unloads a round into the floor as Hank Williams' "Lovesick Blues" whines in the startled silence.

"I was really afraid to write that," admitted Crowell of his memoir last month during South by Southwest. "It was so raw and open, writing about domestic violence in my own family. I was afraid of it."

Nevertheless, he explores his childhood growing up in the ramshackle streets of Jacinto City with a warm, if brutally honest, eye. His devotion to his parents also reveals the roots of his songwriting, both as an escape and an inevitable ambition passed down from his father's honky-tonk bands. By the time he arrived in Nashville in the early Seventies, fellow Tex-pats Clark and Van Zandt had established a vibrant scene of musicians transforming country music.

"It was a great moment, a little Paris in the Twenties," offers Crowell. "I got there just at the tail end of when Guy and Susanna were in East Nashville, and Townes was in and out of town. Townes would come in off the road and he'd be upstairs kicking and jonesing whatever he was jonesing. All the songwriters would gather downstairs at Amy Martin's house and bore each other to tears playing their songs at each other and waiting for Townes to come down. Then Guy would show up, and everybody would straighten up and start putting their best stuff out.

"You didn't play shitty songs in front of Guy."

The scene attracted a rotating cast of rising talent and wild Lone Stars, from Steve Earle and Lucinda Williams to psychedelic progenitor Mayo Thompson of Red Krayola and blues guitarist Rocky Hill. Crowell began reaping his own success as well, garnering the attention of Harris, who recorded his "Bluebird Wine" to open her major-label debut, 1975's Pieces of the Sky.

"All these characters were swirling around, but the real focus of it was the art and the craft," says Crowell. "You get to Nashville now and the conversation might be about what publishing company you can hook up with, or who can you co-write with, but there was never a conversation about co-writing then. It was about what you were doing and what were you getting at, the beauty of playing a half-minute song at 3am with a bunch of drunken heathens who are passionate about songs. Then when you wake up the next afternoon, you start fixing what you had, and then you go off to the next round.

"So it was just a good time, and I've had a whole career just because I was there."

In L.A., Crowell became a cornerstone of Harris' outfit, playing guitar and singing backup for her all-star Hot Band. He also contributed songs to her albums throughout the Seventies, including "Till I Gain Control Again," which Willie Nelson later made a standard. Taking a cue from his employer, he assembled incomparable backing from the Hot Band, including alumni Hank DeVito and Emory Gordy, along with notables such as Vince Gill. Crowell released his debut LP, Ain't Living Long Like This, in 1978.

A year later, he produced Rosanne Cash's debut Right or Wrong, featuring four compositions from Crowell. Their chemistry transcended the studio, and the two married that same year, 1979. The couple settled in Nashville to be closer to Cash's family as they raised four daughters, including one from Crowell's previous marriage.

The union not only brought him into the powerful sphere of the Cash family, it also forged one of the most creative partnerships in country music throughout the Eighties. Cash's seminal Seven Year Ache – again produced by Crowell – and the songwriter's own solo releases injected a rock influence into traditional country sounds. He finally achieved mainstream success with his fifth album, 1988 blockbuster Diamonds & Dirt, which shed five No. 1 hits and heralded Crowell as the new voice of country radio. That success proved a double-edged sword when follow-ups failed to garner the same appeal.

"I thought I needed to recapture country radio, but my heart wasn't really in it," admits Crowell. "Out of fear, I went back and made some mediocre records. I was trying to please the record company, who gave me a whole lot of money to make records for them, which is like a bad drug for me. I would say '94 and '95 was my low point, trying to recapture something, so I just shut it down. Plus I'd just gotten divorced, and had the girls living with me. I needed to do that, and it was a really good thing, because in that time period it slowed down."

Crowell continued to perform and write following 1995's Jewel of the South, but his attention turned toward his family as he grappled to find new inspiration. He re-married in 1998 to country artist Claudia Church and lost his mother a month later, prompting the beginning of Chinaberry Sidewalks and sparking the more inward turn to his work that emerged with 2001's The Houston Kid.

"For me, my recording career really began about 13 years ago," reckons Crowell. "Since then, I've been pretty productive because I found it."

"I wrote a lot of songs as a younger man just on the fly, just having fun and taking it for granted," says Crowell. "Shit just came to me. Whether I was worthy enough of whatever dollop of inspiration I got at whichever particular time is debatable. I'm certainly more worthy of it now. Inspiration that comes to a man of my age in his early 60s, it's a different brand of inspiration and you have to earn it. If you put down the shovel, it's not going to come."

Crowell attributes the effort of writing his memoir, days anchored at his desk, as helping regain his focus. Fate's Right Hand (2003), The Outsider (2005), and Sex and Gasoline (2008) all threaded the dual impact of personal reckonings and impassioned social commentary. His writing has become fierce and fearless, whether turned upon himself or society.

"I said I'm going to start defining myself, and what I'm going to do for the time being is anything I'm afraid of."

Tarpaper Sky reunites Crowell with longtime collaborator Steuart Smith and continues his autobiographical mining with "Grandma Loved That Old Man" and "Jesus Talk to Mama," but also ignites up-tempo stomps "Fever on the Bayou" and "Frankie Please." The album laces an intimate sense of mortality, from opening anthem "The Long Journey Home" to Townes Van Zandt-inspired closer "Oh What a Beautiful World."

"Tarpaper Sky is much broader than anything I've done in the past couple of years," asserts its author. "The songs are a little more broad-stroke, user-friendly songs, but done singularly."

Even as the album caps one of Crowell's most productive periods, the songwriter's far from satisfied. He admits to having songs for a new album already written, and he and Harris are talking about a follow-up to Old Yellow Moon.

"I'm far more deliberate in my songwriting," he says. "The work's harder, but I'm willing to shoulder the work to get the end result, and I love the day's work. There's nothing more important than the day's work.

"And I'm just getting started," he adds with a grin and a laugh. 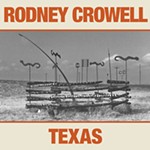