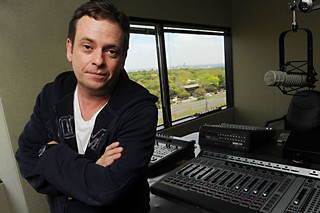 Get ready to reprogram the FM presets on your car stereo. This month, Austin's airwaves expand with a new radio station called Fringe.

"What does fringe mean?" ponders Program Director Ray Seggern. "It means we're off the beaten path. It says that, relative to the competition, we're slightly off center."

Seggern, a journeyman of local radio and advertising who recently abandoned his long-held post as host of 101X's Sunday morning Chillville, says the new independent commercial station will share workspace with sister station KOKE 99.3FM – whose head honchos Bob Cole and Jason Nassour are the primary owners of Fringe. The new signal goes live in a matter of weeks and tunes in a morning show and afternoon deejays playing free-form radio.

What musical genres and eras Fringe specializes in remains to be heard, but Cole's involvement may give some indication, since KOKE takes the approach of being a less mainstream counterpart to slick country radio. The "slightly off-center" Fringe may then be a similarly alternative format to another major market. The frequency's position on the dial hasn't been made public, either.

Even more shrouded in secrecy are the identities of Fringe's morning show hosts, which Seggern refused to reveal, citing noncompete contracts, though widespread industry rumors previously indicated that JB Hager and Sandy McIlree will handle the duties. JB & Sandy were the morning drive personalities on Mix 94.7FM for 18 years before that station declined to renew Hager's contract late last year and McIlree left shortly after.

"I know for a fact that Austinites love this morning show we're about to unveil," allowed Seggern.

When talking to the Fringe team, a singular narrative prevails: local guys rallying against the corporate radio model. They envision a station where deejays are instrumental in creating the brand's cultural and musical identity, where making personal connections with your audience holds more water than Portable People Meter ratings, where the autonomy prevails instead of following the directives of out-of-town consultants.

"It can be this simple," outlines Seggern. "All we have to do is put great music on."

On Monday, I stood in the rain, struck by the new mural on the side of Downtown hot dog joint Frank. The painting depicts outstretched hands with one wrist reading "Help heal the hurt" and the other "DeAndre, Sandy, Steven, Jamie," the four victims whose lives were claimed in the Red River hit-and-run during South by Southwest. In the center, "Let's band together."

The mural by local artist Federico Archuleta was commissioned by Frank owner Daniel Northcutt, who was at Mohawk on March 13 when a drunken man fleeing the police blasted a car through a crowd of pedestrians in front of the club, killing four and injuring others. Northcutt witnessed the devastation firsthand as he was in the street trying to help the injured.

The following night, Mohawk owner James Moody, working with the city and SXSW, began channeling profits from that evening's concert into an existing relief fund called SXSW Cares. Festival organizers established the fund in 2011 to raise money for victims of the Japanese earthquake. The overwhelming response to a horrific act – at press time SXSW Cares has raised $200,000 – remains inspiring, and the generosity of Austin's music community continues to offer financial support to the Red River victims, this time with a larger series of concerts throughout town.

The SXSW Cares Big Benefit, April 12-20, revolves around local clubs donating profits from select concerts to the relief fund, maintained by Austin Community Foundation and dispersed to victims and their families. Stubb's hosts three, including an outdoor show next Saturday (April 19) with jam band Umphrey's McGee, Mohawk offers local powerhouses Ume and Megafauna the same night, and Holy Mountain hosts Possessed by Paul James Friday, April 18. It's not just Downtown clubs participating in the initiative, either.

Strange Brew welcomes Billy Wilson south this Saturday, while east, Hotel Vegas offers the benefit's most creatively curated event on Sunday: an Elvis-themed party with tribute act King Pelvis. Munch a fried banana & bacon sandwich, get your hair styled into a pompadour, and participate in a hip-gyrating contest for a bar tab.

› After Arcade Fire plays tonight (Thursday) at the 14,000-capacity Austin360 Amphitheater, they hit the 300-person Continental Club, where members perform as Phi Slamma Jamma and singer Win Butler spins as DJ Windows 98. When word got out last Friday, $17 presale tickets sold faster than the brisket at Franklin's Barbecue.

› KLRU's Austin City Limits will induct Willie Nelson and Stevie Ray Vaughan & Double Trouble at its inaugural Hall of Fame event, April 26 at the old Studio 6A. Performers that night include Buddy Guy, Lyle Lovett, Emmylou Harris, Lukas Nelson, and Doyle Bramhall II. ACL Executive Producer Terry Lickona tells us the decision to induct Willie and Stevie Ray was a "no brainer" and that they have "not yet established the process or determined exactly what the criteria will be for future inductees." Meantime, local garage prog jammers White Denim tape the program on August 4.

› Grammy winner Delbert McClinton underwent emergency triple bypass heart surgery on Monday after experiencing chest pains before a gig in St. Augustine, Fla. According to a source close to the family, the Texas legend's ticker is working now, and his doctors have attributed his impressive post surgery X-rays to the lung capacity he's built by singing every night. He's expected to leave the hospital Friday so he can return to his son, musician Clay McClinton, who sustained a serious head injury in a car accident two weeks ago. Clay was recently moved from intensive care to a rehab unit and is recovering remarkably quickly.

› Local writer, director, and owner of Blue Starlite Drive-In, Josh Frank, has co-authored a new novel, The Good Inn, with Pixies frontman Black Francis. The novel tells the story of a French soldier who survives a battleship explosion, then falls in love with an innkeeper's daughter and travels to a strange counteruniverse. Catch Frank Monday at BookPeople, 7pm.

› Pure X's third LP Angel, a compelling buzz of languorous psych pop, was released last week on Fat Possum Records. The local quartet recorded it in November at Lavaca County's 100-year-old Wied Hall, where the band pulled 15-hour recording shifts. "You could feel the good times that had been had in there," reflected multi-instrumentalist Matty Tommy Davidson. "The wooden floors were worn down from years of dancing." The group plays its first local show in over a year on Saturday at Empire Control Room with M Geddes Gengras, and Symbol, the solo project from This Will Destroy You's Christopher Royal King. Symbol's debut LP, Online Architecture, arrived this week on Austin's Holodeck Records. 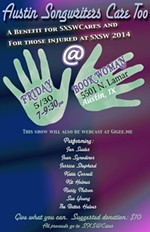 Where the Girls Go/ATX: Regular Weekend Edition
The 101 on where to find the Q crowd this weekend in ATX

After a Fashion
It's all about the give and take. And the swag.