In an ancient Indian parable, a group of blind men examine an elephant and attempt to describe it. The one near its leg likens the animal to a tree trunk. The man at the tusks says it's like a spear. The groper of the ear concludes that an elephant is actually similar to a fan. The fellow feeling the torso compares the beast to a wall. The pachyderm is too massive for any one set of hands to get a clear picture of its totality.

Same for South by Southwest.

Beginning with 2,200 showcasing acts and hundreds of unofficial bands, plus panels, installations (Flatstock), and day parties, a singular experience escapes us. Nonetheless, the national headlines generated in Austin last week have largely reduced last week's SXSW's action down to a three-point narrative: the deadly Red River hit-and-run, Tyler, the Creator's arrest for inciting a riot, and Lady Gaga selling out to Doritos.

"Without sponsorships, without these companies coming together to help us, we won't have any more artists in Austin. We won't have any more festivals because record labels don't have any fucking money," the 27-year-old pop icon claimed in a didactic keynote interview Friday, which otherwise leaned heavily on the importance of artistic independence.

Gaga's chips partnership, along with Samsung's presentation of Kanye West and Jay Z at the Austin Music Hall Wednesday and the iTunes Festival taking over ACL Live at the Moody for multiple nights with Coldplay, Soundgarden, Keith Urban, Willie Nelson, and Zedd demonstrated that corporate cash now finances some of SXSW's biggest headliners. Any of these companies can write a check with enough zeros to fill any venue with any artist the second week of March regardless of SXSW's participation, leaving the Festival in the position of co-promoting or being elbowed out of its own event.

The problem with these megashows isn't that they strip attention from smaller bands. There's plenty to go around, after all. It's that they're a beacon for the masses. So next year's corporate headliner, be it Beyoncé or Bieber, could mean even bigger crowds. That's trouble, because the events of SXSW 2014 proved that crowd control is now issue No. 1.

The city made clear its public safety concerns pre-SXSW, limiting special-event permits before denying Lady Gaga license to play a parking lot. Proving they've entered into take-no-shit mode, the Austin Police Department arrested Tyler, the Creator at the airport Saturday afternoon on charges of inciting a riot, connected to his performance on Thursday afternoon at the Scoot Inn, where the L.A. rapper (real name Tyler Okonma) instructed fans outside the club to rush the venue. "All y'all outside the gates, y'all push through," the police report quoted Okonma as saying, prompting roughly 200 of his young fans to push through the club's wooden gate.

Lana Levins, general manager of the venue, says that despite police and fire marshals being present and her staff having prepared for gate-crashers, the riled-up crowd quickly became unmanageable.

"It was terrifying," she reports. "People started grabbing tip jars so we closed down the bars, moved the registers, and retreated inside."

While Tyler's mic had initially been muted, management and police agreed the show had to continue to avoid escalating into a true riot. Tyler then cut the set short of his own volition. According to the APD affidavit, one bartender was punched in the face, which bumped up the charges from a Class B to a Class A Misdemeanor.

In 2011, when Tyler's rap conglomerate Odd Future was SXSW's ultimate buzz act, they goaded fans into climbing over the walls at the Scoot Inn and the general public seemed to cherish their anarchy. Their careers were made that day. Now, three years later, the APD made an example of Okonma, who spent several hours in jail and was released on $25,000 bond, tweeting his mugshot and issuing a press release: "The encouragement of unruly and unlawful behavior is against the law and cannot be tolerated." It could have read: "Bad timing, Tyler."

The night before, Tyler's performance at Mohawk was canceled when a bush-league rapper/producer from Killeen named Rashad Owens sped a gray Honda Civic through a barricade and into a large crowd on Red River after midnight, killing Steven Craenmehr, 35, of the Netherlands, Jamie Ranae West, 27, of Austin, and, Sandy Le, 26, also of Austin, who died in the hospital five days later. Twenty-two others were injured.

Owens, 21, was fleeing police, who lit him up for driving without headlights and making an illegal left turn. Instead of pulling over, he took off on a vehicular rampage that ended with him being Tasered, arrested, and, ultimately, charged with capital murder. The car he drove was reported stolen, after the incident. He's being held on a $3 million bond.

Meanwhile, the conference has been criticized by prominent media, notably the Los Angeles Times, which characterized this as an "off-year," and The Wall Street Journal and The New York Times, both of which charged SXSW with having lost touch with the little guys.

I'd argue the worsening aspects of SXSW aren't organizational, but cultural. Because of its notoriety, the Festival has become a hangout for intolerable dickheads – and not the industry ones, but hordes of non-participating partiers who bring the major walkways to a standstill. Sixth Street during SXSW could make you long for the serenity of Bourbon Street or Tijuana's Avenida Revolución. Stationary teams of blunt-smoking alpha males holler at any female passing by as police crews assemble in menacing crowd-control formations and wasted spring-breakers puke pizza into the gutters with nary a badge or wristband with which to wipe the vomit.

At least five videos of SXSW 2014 street brawls have appeared online, one involving dozens of fighters, another concluding with an unconscious loser being loaded into an ambulance on a stretcher. Despite what those clips reveal, the violence wasn't limited to young, black males on Sixth. On Friday night, a crew of California-based skateboarders attacked the outnumbered staff at Yellow Jacket Social Club after a member of their group was ejected for climbing in over the fence, according to one employee.

As hosts of a multitude of festivals, Austinites are used to visitors treating the city as a playground, but the increased lawlessness and "anything goes" attitude has made Downtown a gauntlet. 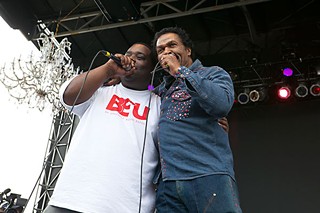 You can count on changes before next March. Expect SXSW to continue working with the city and police department to address public safety and crowd-control issues. As for the music itself, nothing's broken. I was turned on to more amazing, lesser-known acts this year than ever before at SXSW. If you weren't, you were too busy going Gaga. I received an inspiring history lesson from both the panel and performance of generation-bridging Memphis music revue Take Me to the River, which included jaw-dropping collaboration from soulman Bobby Rush and rapper Frayser Boy backed by the Hi Rhythm Section with Booker T. Jones, as well as the North Mississippi Allstars jamming with Charlie Musselwhite. I witnessed innovative international acts like Brazilian guitar-pop act Boogarins and Australian crooner and noise-guitar warrior Kirin J. Callinan. I made a rare church appearance to glimpse spirited vocal-loopist Moses Sumney, was thoroughly entertained by Dallas hip-hop duo A.dD+, and fell in love with perfect riffing femme trio Ex Hex and young Afro-punk band of brothers Radkey.

What shape the great SXSW mammoth takes next year remains to be seen and interpreted from a thousand angles, but it will be here and so will we. 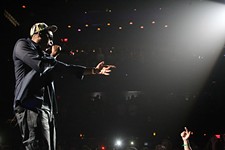 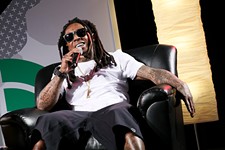