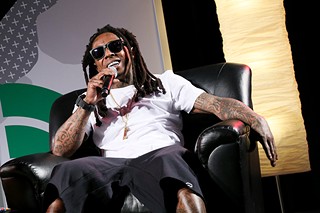 The announcement that Lil Wayne had been scheduled for a SXSW interview all but confirmed that the New Orleans rapper would seize a moment to jump onstage during the conference. It was thus hardly a surprise when Weezy made an appearance at the mtvU Woodie Awards on Thursday, performing his 2008 single "A Milli" and spitting a few bars of non sequitur prose.

The following afternoon, the 31-year-old rapper plopped down in a big leather chair – sunglasses on, freshly stoned, grill gleaming – and casually chatted with Rap Radar founder Elliott Wilson, who immediately pressed for details on Carter V, said to drop May 5 on Cash Money Records.

"I can tell you that I'm working very hard. Other than that, the usual suspects are on the album. My team, we're blessed with great music, wonderful production," explained the MC, his sleepy rasp sounding absolutely bizarre over the PA. "I think we're going to be dropping something this week."

"This might be your last album for a while, right?" Wilson pressed.

"I'm approaching it like it is my last project," he confirmed. "The grind is different. I gotta approach it like there's no tomorrow."

The 70-minute discussion, throughout which Wayne had the audience rolling with his disarming humor, touched on his fanhood for Jay-Z, being in prison, his sports obsessions, last year's health scare, fatherhood, Kanye's mask, and why he's let go of his "best rapper alive" schtick.

"It ain't about that now. Now I have artists that I want to be better than me. It's about them. It's about us," stressed the Young Money Entertainment CEO, adding that representing fellow artists is easy money: "Checks are coming in and I didn't even have to step in the studio." 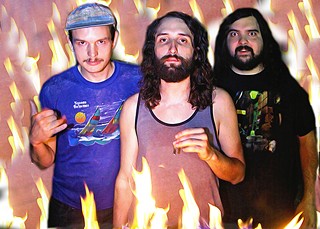 "If I forgot anybody, I'm sorry. I smoked before I got out here. Shout out Willie Nelson. That's the homey."

Just when you thought it was safe to go back in the water, American Sharks splash into Town Lake, headlining a floating concert. The four-band booze cruise, brought to you by Austin's American Icon Records, includes the cocaine-sludge sounds of the Sharks, plus Fullerton, Calif., pop-punks Audacity, the oldies guitar-pop of Fletcher C. Johnson, and garage punks Meat Market. The three-hour cruise, setting sail at 9pm, floats though the center of Austin. Tickets are $25, $20 if you wear a bikini – woman or man.

• Fort Worth alt-rock fixture the Toadies, known for their astonishingly durable, Nineties hit "Possum Kingdom," play their magnum opus, 1994's Rubberneck, from beginning to end for the first time ever tonight at Stubb's, 8pm. The album's 20th anniversary will be thoroughly revisited with a Kirtland Records reissue on April 1 and a three-month national Rubberneck tour with the Supersuckers and Battleme opening. Look also for a special-edition beer from Martin House Brewing called Rubberneck Red, and a new documentary, Dark Secrets: The Stories of Rubberneck, spilling enigmas around the classic album.

• If you feel like you need a change of pace from the metropolitan melee of SXSW, there's no better option than hitting the last days of Rodeo Austin at the Travis County Expo Center (7311 Decker Ln.). Kick back with the rural folks and watch bareback bronco riding, steer wrestling, pig races, roping, bull riding, and, everyone's favorite, mutton bustin', where a small child clings to the top of a sheep while it runs like hell. The $20 ticket also includes a concert; tonight brings hero to the pickup truck and camo-hat crowd, Austin's Kevin Fowler (7pm), while Sunday you can catch honky-tonk heartthrob Dwight Yoakam.

• Children, don't stand too close or your face may be melted off. Austin's School of Rock, teaming up with the Musician's Institute, exposes its aspiring musicians to the art of shredding as they host a clinic and concert with progressive metal bands Periphery and Animals as Leaders, the latter featuring 8-string-guitar virtuoso Tosin Abasi, today at Rusty's (405 E. Seventh). Tickets are $20 and include instrument clinics (2pm) and a concert (6) which, along with the prog-metal acts, also features house band the B Team, searching and destroying onstage with Stooges guitarist James Williamson.

• You've been ignoring your family all week, attending panels, drinking at day parties, and staying out late at showcases. On Sunday, gather the kiddos and head down to Mad Tiger Fest 2014. In addition to performances from Peelander-Z, the Octopus Project, Anthropos Arts All Stars, and McCallum HS Samba Knights, there will be live magic, crazy toys, and painting by Kengo Hioki, aka Peelander Yellow, who, this year, realized his dream of having his art featured on the official SXSW totebag. The family-friendly event, put on by Austin's Chicken Ranch Records, goes down at Kenny Dorham's Backyard (1106 E. 11th), just a few blocks east of I-35.

• Believe it or not, SXSW isn't the only music festival in Texas in March. Next week, our big city neighbors to the south, San Antonio, host the second annual Maverick Music Festival, which draws a significant amount of its bookings from artists routed to the area for SXSW, including Phantogram, Washed Out, SZA, the Black Angels, and Piñata Protest. The lineup, which was expanded to two days this year, also features the Psychedelic Furs, Twin Shadow, Run the Jewels, the Joy Formidable, Roky Erickson, Candlebox, and the Gories. Stay an extra week in central Texas and cruise down to Maverick Plaza in Downtown San Antonio next Friday (5:30pm) and Saturday (11am).

• Even after a warm-up show at Continental Club on Tuesday and performing "Waves of Fear" at last night's Lou Reed tribute concert, the Fauntleroys still have that new-band smell. The avant-garage quartet, featuring Alejandro Escovedo on bass and vocals, Nicholas Tremulis, Voidoids guitarist Ivan Julian, and Linda Pitmon on drums, showcases tonight at the Saxon Pub, 10:15pm.