Thursday morning's aftermath on Red River, outside of Mohawk (Photo by John Anderson)

I was watching a Brazilian psych band perform in a backyard on Rainey Street when a succession of texts alerted me to a deadly incident on Red River. Instantly, music seemed trivial, silent even. I rushed to the scene, taped off between Ninth and 11th, and listened as Austin Police Chief Art Acevedo broke the news: an allegedly drunk driver, fleeing the police, drove past a barrier and plowed through a crowd of pedestrians in front of Mohawk, causing a pair of fatalities and injuring 23.

Thirty-five-year-old Steven Craenmehr, creative director for Massive Music, was killed when his bicycle was struck. Another victim, identified by the Austin American-Statesman as Jamie Ranae West, was on a scooter and also died. The suspect, Rashad Charjuan Owens, a 21-year-old from Killeen, will be charged with two counts of capital murder.

The Chronicle's Tim Stegall was reviewing punk pillar X's midnight performance at Mohawk when he witnessed a scene "like something out of a horror movie": A car speeding through the closed street pursued by two police cruisers, after which crowds quickly came to the aid of victims lying in the street. A representative from the club informed the audience of the accident and instructed them to exit carefully to the right.

After sunrise, an exhausted SXSW Managing Director Roland Swenson took to a podium at Ninth and Red River to read a statement: "Despite all of our preparations for dealing with a major incident during South by Southwest, nothing could really prepare us for how this feels. As much as we would like to just go home and spend time absorbing the shock of this horrific event, we feel our best use is to continue to operate today."

An email sent from SXSW to its volunteers, read in part: "We are very proud of how our team pulled together last night and into the early hours of this morning. Numerous staffers, in particular [Special Venues Crew] Chief Alexa Gomez, had just finished moving the audience line out of the street onto the sidewalk moments before the accident, saving many dozens of people from being injured or worse."

Sobering is the only way to describe the vibe Thursday morning. By 1pm, lower Red River was vibrant with a punk band playing on Beerland's front patio and a long line for the Hype Hotel across the street, but clubs near the morning's crime scene were eerily quiet. A handwritten sign in front of Cheer Up Charlie's canceled afternoon activities. Mohawk's day party had also been called off. Late in the afternoon, both venues, in conjunction with the APD, SXSW, and the city of Austin, announced that their evening showcases would become fundraisers for SXSW Cares (www.sxswcares.com), a victim relief fund.

"My staff and myself are broken-hearted for not only the victims and families of this senseless tragedy but also for our beloved Red River and this entire community," Mohawk owner James Moody said in the statement.

Thursday's catastrophic hit and run wasn't the first time blood was shed at SXSW. In 2011, a 350-pound camera boom fell on audience members at Stubb's during an OMD performance, requiring two concertgoers to be carried out on stretchers. The camera crew had been hired by the show's sponsor, not SXSW.

SXSW officials declined to speak about what the accident means for the Festival, but recent events like the city refusing Lady Gaga a permit to play in the Doritos pop-up vending machine stage and limiting the number of special events permits doled out this year indicate that public safety concerns are already being actively addressed. It stands to reason those measures will be increased. And if the pending APD investigation discovers Owens was overserved alcohol at a day party, you can bet the landscape of SXSW 2015 will look different.

In the aftermath of Thursday, local blood bank donations skyrocketed and media and social posts concentrated on keeping Austin up-to-date on all developments. No one was talking about bands. We mourned the dead and hurt, and talked about who was all right.

We All Live in a Yellow Submarine 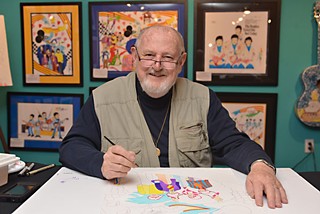 "I think Yellow Submarine captures the spirit and zeitgeist of the Sixties like no other film," offered Ron Campbell. "It was the Beatles' music and psychedelic art, the look of the era. That combination was dynamite." Campbell worked as an animator on the 1968 Fab Four feature, as well as directing the Saturday morning Beatles cartoon TV series. The Australian illustrator, who in his post-Beatles career drew for The Jetsons, Scooby-Doo, and Rugrats, retired in 2008 when computers changed the animation game. "Rather than sit in my easy chair and slowly die, I decided to do some paintings based on cartoon shows I worked on," said Campbell from his post in Wild About Music (115 E. Sixth), where he'll remain doing live drawings from 1-9pm today and tomorrow. Among his art on display, exquisitely colored images combining the Sgt. Pepper's and Yellow Submarine eras, as well as a cartoon version of the Beatles' famously banned Yesterday & Today butcher cover. Smokin' in the Boys Room: Cheetah Chrome (l) and James Williamson backstage at the AMAs (Photo by Todd V. Wolfson)

With Dead Boys guitarist Cheetah Chrome and the Stooges' James Williamson jamming "White Light, White Heat" with Alejandro Escovedo and Blondie's Clem Burke on Wednesday at the Austin Music Awards, two of the best punk guitarists of the Seventies joined forces. Chrome's been making the most out of his SXSW and is slated to play with local Dead Boys tribute act Flamethrower Love at the Lost Well (2421 Webberville) today before heading to the Legendary White Swan to play "Sonic Reducer" with Tim Stegall's Hormones. After that, it's down to the Paramount Theatre, where he'll take part in the Lou Reed tribute. Williamson's busy, too, talking punk rock and tech with Melvins guitarist Buzz Osborne at the "From Riffs to Bits" panel today at the Convention Center, 12:30pm, room 12AB. He's already collaborated with local blues shredder/howler Carolyn Wonderland, having tracked her vocals on blues versions of Stooges rarities "Open Up and Bleed" and "Give Me Some Skin" for the forthcoming album Re-Licked, which also features Gary Floyd of Austin's Dicks singing "Cock in my Pocket."

• Los Angeles artist Charles Long's art installation at the Jones Center (700 Congress) will be taken over by electronic musicians tonight. Long's "CATALIN," a multi-sensory environment incorporating sculpture, fragrance, light, film, and theatre will be activated by four experimental electronic artists – 8prn, Paradise, Kodak to Graph, and Palmbomen – whose sounds will interact and integrate with the installation. The event runs 8pm-12mid, free to badge and wristband holders.