After a string of anticipatory EPs, Noah Gundersen's debut full-length delivers a collection of songs with a similar slow build. Throughout, the Seattle songwriter exhumes broken, penitent ballads that suddenly burst with a shock of power and catharsis. The pattern begins with a cappella opener "Poor Man's Son," harmonized gracefully with sister Abby. It quietly accumulates a faint guitar strum, drifts naturally into "Down to the River to Pray," and then explodes into a wailing chorus of lament. Like a more Americana-inflicted version of the Frames, the stylistic movement of sparse drawl spun into crashing climax and swelling strings becomes predictable, yet Gundersen's songwriting wrings an authenticity of fears, want, and religious weight. "Isaiah," the title track, and "First Defeat" relentlessly gut punch with regret, countered by the beautiful, brutal longing of "Cigarettes" and closer "Time Moves Quickly." Ledges waivers with harrowing lyrics, but worn arrangements. (9pm, Bungalow) 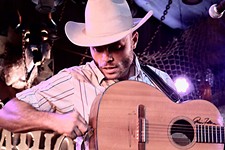