Have You Seen Your Mother, Baby, Standing in the Shadows 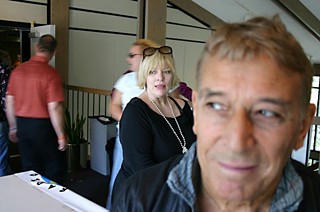 Begin with the Fabulous Thunderbirds in 1984, and remember who you're talking about. A preeminent band beginning in the mid-Seventies, Kim Wilson, Jimmie Vaughan, Keith Ferguson, and Fran Christina did it all and did it first for Austin: major label deal/hits/sales, Grammy bait, MTV staples, jamming with the gods (Stones, Clapton, Santana).

The guitarist's eager young brother watched, learned, and eventually leap-fogged his elders. Every blues and rock act in Austin, from the Arc Angels to Gary Clark Jr., follows in the T-Birds' wake.

Now bring in the Big Boys, counterculture to the counterculture – early evolution of punk music, music's dominant subculture of the late Seventies and early Eighties. Core trio Randy "Biscuit" Turner, Tim Kerr, and Chris Gates humanized the emerging hardcore scene by adding horns, its frontman's tutu, and skate culture to a quickly atrophying regime of punk rock rules. Throw credit to twin pillar the Dicks, and virtually every club on Red River springs from this DIY imprint, not to mention Fun Fun Fun Fest, named for the seminal Big Boys EP from 1982.

Two years later, on March 9, for the third annual Austin Music Awards at Willie Nelson's Austin Opera House just off Congress Avenue near the Continental Club, Margaret Moser booked both groups as her headliners. In a year where Stevie Ray Vaughan took home top honors for his debut Texas Flood; Butch Hancock beat out Townes Van Zandt for Songwriter of the Year despite the latter's "Pancho and Lefty" winning Song of the Year; and Hall of Fame inductions for Bob Wills, Buddy Holly, Roy Orbison, Janis Joplin, and Ornette Coleman, Moser defined the burgeoning local scene by highlighting its two topmost extremes. One act represented the status quo and the other its antithesis, but together they spanned the already widening breadth of Austin music.

Attendees that night – hipsters, hippies, cowboys, rednecks – got everything they bargained for including a fight between the Big Boys and some beef-fed Willie fans who didn't like the way they operated. Fans and bandmembers exited with a few lumps and bruises. Moser left with a template.

More than three decades after she figured out how to assemble a glamorously haphazard music awards show, Margaret Moser moves though the Austin Convention Center on a sunny Sunday in February trying to secure secluded space for Blondie. Deborah Harry's presenting a plaque at the Austin Music Awards this year because she's Moser's own demographic – children of the Fifties fed on Sixties music and empowered by the Seventies DIY ethic. Since this is the AMA director's final year presenting the show, she's getting exactly who she wants.

Moser's principal staff of 30, friends and colleagues cultivated over the millennia, assemble on the first floor for an initial walk-through of the cavernous space, interim site of the AMAs after an extended run at the Austin Music Hall. Before their arrival, she eyeballs a corner of the green room to see if it can be roped off for Blondie.

"The show's like a hot dog," she grins. "Tastes really good, but you don't want to know what goes into it."

The Chronicle's senior Music writer, a post from which she retires in May, took over the AMAs in their second year, 1983, after an inaugural year of "shambles" at Club Foot. In the early stages of a career in journalism that sprang from her leadership of the Texas Blondes, a contingent of "social" women dubbed as such by Velvet Underground luminary John Cale, she knew what she liked and which musicians made her happy. If she got enough of them into one room, fans would likely fill it up.

The shows were easier back then. For starters, the Music Awards predate South by Southwest. Underlining the Chronicle's annual Austin Music Poll, a winter competition of write-ins, the event soon became the local music prom, a night to dress up, rock out, and maybe even be honored by Austin itself. When SXSW debuted in 1987, the AMAs began to accommodate the national audience flying in, its spirit morphing from "congratulations, y'all" to "hey, look at us!"

Moser moved to Hawaii in the late Eighties after marrying tattoo legend Mike Malone (aka Rollo Banks), retaking ownership over the AMAs when she returned in 1991. By then, SXSW had become a cultural event. New York, London, Paris, Munich, everybody talk about pop musik.

Out-of-towners arrived from all corners to catch West Texas bard Joe Ely or banjo and fiddle punks the Bad Livers; Roky Erickson, Daniel Johnston, P; Alejandro Escovedo and Jon Dee Graham's True Belivers backing the Faces' Ronnie Lane. Outside the music capital, these were exotic sightings, but at SXSW and the AMAs, they occurred on a yearly basis.

In 2012 – several years after Pete Townshend made a surprise appearance for another Austin Face, Ian McLagan – Bruce Springsteen, Alejandro Escovedo, and Joe Ely gave everyone an AMAs to remember.

"I shoulda retired after Springsteen," admits Moser. "Nothing will ever top that."

Last February, Moser walked into her doctor's office to take a CAT scan and walked out with stage III colon cancer. The shit had hit muscle. Doctors said she had five years.

A few weeks later, just days before the Music Awards, she went in for a PET scan, emission tomography imaging that uses a radioactive substance called a tracer to track diseases within the body. Her oncologist found that the cancer had spread to her lymph nodes. Stage IV. Five more years? Maybe a 6% chance. 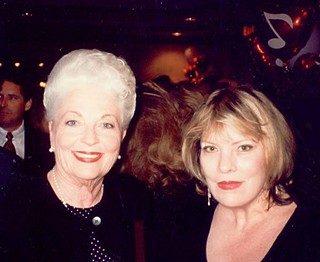 Her oncologist waited a week to tell her. After all, there was an Austin Music Awards show to run and Moser needed the peace of mind to run it. When SXSW was over and he informed her, the prognosis was clear. "I just don't have the time anymore," she told KUTX deejay and friend Jody Denberg during an Austin Music Experience segment last month. The longest tenured employee of the Austin Chronicle's 32-year existence was telling the public goodbye.

Moser started off as a receptionist when the paper first published Sept. 4, 1981, then took over the Music news column, shipped off to Hawaii, and returned three years later to cover TV. She starred as a music writer throughout, penning three books about Austin, countless profiles (1997's survey of Will and Charlie Sexton remains a personal favorite), and branding more household names before they became blips on the national radar than All Music.

She's the paper's foremost idealization of "respect your elders," the only one to warrant a hug upon arrival, and the individual responsible for recruiting the baddest lineage of music writers this city's ever seen: Michael Corcoran, Andy Langer, Christopher Gray, and Kevin Curtin. You could pen an entire anthology of Austin music on those four bylines alone. She got Raoul Hernandez promoted to Music Editor, and when I moved here in 2007, green as Willie's grass and clueless to who's who in the industry, she helped me get my first steady work.

Happy, gregarious, and prone to bursts of laughter with a mischievous sense of humor, she's a mother figure not only to music writers, but local musicians themselves. She recalls both Sextons in their bunk beds as boys, and now champions their musical offspring. Three weeks ago, leading off a lengthy Music Poll meeting to finalize this year's AMA winners, she read three adults a tiny picture book about bunnies.

"This is the big momma speaking," she once wrote in an email concerning a concert, "demanding you show up."

Son of a True Believer

In blue jeans and a pearl snap shirt outside South Austin's Strange Brew Coffee sits William Harries Graham, the shag-haired son of guitarist Jon Dee Graham. At 14, he's one of the youngest individuals performing at this year's AMAs, having assumed the role of organizer amongst the Youngbloods Choir, a group of scions including Graham, two Sextons, two Sara Hickman offspring, and the daughter of SXSW Director Roland Swenson.

Ten years ago, William Harries Graham became the youngest person to ever play the show. He's also the youngest writer spilling ink for the Chronicle, contributing to the Music section weekly. You'll never guess who recruited him.

"I've known her all my life," says Graham. "There's never been a moment where I haven't. I call her Auntie M. She asked me to call her that."

William's education comes from home schooling, through programs set up by Northwestern, Stanford, and Harvard. He's taken writing classes and journalism classes but quit when Moser nabbed him.

"I was leaps ahead of what the courses were asking me to do then," he explains. "They were asking, 'Hypothetically, what would you do if you were supposed to interview someone,' and it's like, 'I'm already doing that stuff. I interviewed two people last week.'"

Moser's also directly responsible for Graham's growth as a musician, having booked him on teen-band bills she put together and helping him stage and promote shows himself. Name any young native of Austin music making their way in the industry and you can likely trace their emergence back to Moser: Graham, Marlon and Finley Sexton, Grace London, Mother Falcon, Gary Clark Jr., the Peterson Brothers. The AMA's principal staff boasts seven individuals whose parents possess intimate knowledge of the event. Names like Corcoran, Escovedo, Scalzo.

The 10 Little Bunnies booster not only made Austin music history, she scripted it.

(Is Anybody Going to) San Antone

Lucinda Williams, Texas Tornados, Alejandro Escovdeo & Jon Dee Graham; the 2013-14 Austin Music Awards gather Moser's closest musical stalwarts for one last prom. Amidst the SXSW mayhem now created by Apple, Doritos, and Lady Gaga, the AMAs have largely reverted back to their roots. Even with the surprise appearance of Gary Clark Jr. last year, it's an internal celebration and local showcase. Congrats, y'all!

After she retires this spring, Moser and her boyfriend Steve Chaney, a local restaurateur and SXSW alum who manages stage operations for the AMAs, are moving back to her native San Antonio.

"I want to say this real carefully," she smiles with a bright gleam in her eye. "I'm fucking sick of Austin."

In the Alamo city, traffic's easier and groceries are cheaper. Plus she's got the South Texas Popular Culture Center, a museum she opened with Michael Ann Coker in 2012. She'll be busy.

"The music's changed so much in Austin," admits Moser. "I feel like I've done my work here."

Mostly. At Sixth Street eatery El Sol y la Luna – on the footprint that used to house Emo's – Moser and Chaney dine on breakfast tacos and pozole while listening to a young woman and her band from Nashville play country music like it once sounded. The set ends just as the check arrives, and the singer walks over to introduce herself and thank us for coming. Her name's Samantha Harlow, worth looking up.

"You've got to come to the Austin Music Awards," Moser tells her, handing over her card. "Email me and say you met me at El Sol today. Or come to the Chronicle day party on Thursday. You've got to. It'll be a great one."