Park your hiney at a Tuesday night SXSW showcase 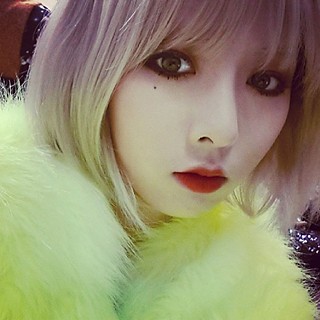 7:30pm, Elysium Like it or not, we're living in a post-"Gangnam Style" world. Since the foreign-language dance craze hit our shores harder than a musical tsunami, it stands to reason that some of the biggest stars from the Korean peninsula are playing a tiny club at SXSW on Tuesday. None arrive bigger than HyunA, the woman responsible for "Bubble Pop!" and "Ice Cream," two of the most indelible tunes to come from anyone's pop industry. Meanwhile, Jay Park offers either the Korean Usher or the Korean Bieber depending on how cynical you are. The hilariously lost-in-translation Crying Nut are a quartet that make thrashing, sneering, emo-pop, while Kiha & the Faces revel in nursery-rhyme heat-seekers, the same sort that made Bruno Mars a Super Bowl-sized star. Watch videos of NELL sitting in a tent, wherein Kim Jong-wan shows off his honeyed voice under the stars, and even though it's in Korean, it still sounds way more earnest than Coldplay. Jambinai, the first band on, are a bizarre, Mogwai-esque drone rock band, equipped with chugging bass and some truly queasy violin screeches. Whatever you do, don't call K-pop a one trick pony. – Luke Winkie 8pm, Latitude 30 As Scotland considers swimming away from the UK on an independence referendum, it's up to the other coast of the British Celtic fringe to stage a night of the UK's finest, curated by Radio 1 DJ Huw Stephens. Stephen Black, aka mournful popster Sweet Baboo, evokes the sealed room gloom of Cardiff in the winter, then it's a trip across the border for ambient folksters Wolf Alice, who sprung from North London's open mic scene before getting on the radar of tastemakers at Radio 1 and NME. Glasgow's Prides update the Eighties with contemporary nods to the epic pop of Simple Minds and Psychedelic Furs, while Adio Marchant, ex of rap collective Kid British, layers dark melodies to form Bipolar Sunshine, which evokes early New Order. Viral sensations Jungle bring back memories of Technique and Chicago House, its double A-side debut, "Platoon/Drops," catapulting the enigmatic London b-boy duo into the stratosphere before they played a single note live. Garage agro-punks Slaves are pure suburban fury, touted new single "Where's Your Car Debbie" fueling a fear-drenched trip to the back alley. – Richard Whittaker

8pm, Red 7 If you need yet more proof that hip-hop's a global force, look no further than this showcase featuring nine rappers from seven countries on three different continents. Our neighbor to the south comes represented by Guadalajara street chronicler C-Kan, the progressive thump of Control Machete compatriot Milkman, and Mexico City's Eptos Uno, who "Don't Play" on the mic. São Paulo MCs Rashid and Emicida take different approaches, the latter liberally mixing hip-hop with samba soul and other national sounds, while the former takes a more straight-forward boom bap approach. Quito's Guanaco is among Ecuador's top wordsmiths as well as a community activist and leader of cultural outreach program Alianza Hip Hop Para las Calles, or Hip-Hop Alliance for the Streets. London's Afrikan Boy pays tribute to his Nigerian roots on the Fela-sampling "Hit 'Em Up," and Awill's slow flow lopes from Newark via Norway. San Juan rhymer Álvaro Díaz keeps it "SuperXclusivo" in extolling the virtues of the "Chicas de la Isla." Kicking off the night and playing between sets until his bedtime is Austin's own DJ Baby Chino. The 10-year-old, Texas-born, Vegas-raised mixmaster has been honing his skills on the wheels of steel for half of his young life. – Thomas Fawcett 8pm, Avenue on Congress Rooftop Here's a showcase proving to the world, or at least South by Southwest, that Oklahoma is more than Red Dirt and the Flaming Lips. Norman-based singer/writer John Moreland draws comparisons to Jason Isbell for his ability to get low and lonesome, then turn around and rock that red dirt off the soles of his shoes. A 10-piece paying homage to mid-20th century pop and R&B, Matt Stansberry & the Romance ply an expectedly large sound, but it's also one that employs stylish horn riffs and sunshine grooves. If you favor anything Americana these days, remember the name Parker Millsap. Also from Norman, the 20-year-old makes music that falls somewhere between JD McPherson and John Fullbright. Lots of good blues, sly humor, and, unlike 90% of new/developing Americana artists these days, he can carry a tune. Stillwater rock quartet Taddy Porter blends indie pop with its Oklahoma roots and comes up with something that's eerie one moment and hard-edged the next. One of the most buzzed about singer-songwriters in years, John Fullbright found an instant fanbase with 2012 LP From the Ground Up, a folk/blues update of Leon Russell's sound that was nominated for a Grammy. – Jim Caligiuri

8pm, Bar 96 For folks who speak such impeccable English, the Dutch ought to be more prolific at decent rock & roll. Golden Earring, Bettie Serveert, and possibly the Legendary Pink Dots anyone? Even Focus' only hit was an instrumental. Maybe if they spent less time speed skating, they'd produce more outfits like Eindhoven's Mozes & the Firstborn, a garage-psych act akin to a more accessible Brian Jonestown Massacre. They've got a new self-titled LP, but it's pales next to last year's I Got Skills EP, if only for its distinctly vaginal Maude Lebowski cover art. Mister & Mississippi vaguely evoke Of Monsters and Men and Seventies K-Tel hits. The Supergrass meets Depeche Mode of Amsterdam's Monokino is sandwiched in before a couple of EDM outfits. The trio of Kraak & Smaak traafic [sic] in originaals [sic] and collaaborations [sic]. Think of their pop-skewing stuff as the Arjen Robben to the Nigel de Jong of Mightyfools. Meanwhile, the DJ duo of Jelle Keizer and Andy Samin have become festival favorites for their ability to hook a melody before dropping a beat. – Michael Bertin

8pm, Friends A long, narrow strip of land on the West coast of South America with the Pacific Ocean on one side and the Andes on the other, Chile boasts a varied music scene that reflects it being one of the most stable and prosperous nations on the continent. Dënver, a synth-pop duo from San Felipe, makes its U.S. debut with brand new album Fuera de Campo, which recalls American acts like Chairlift with heavy synths and the occasional melancholy folk melody. A hard rock and blues quartet in the vein of Los Lonely Boys, Humboldt is a vital part of the coastal Valpa­raíso scene. From the Chilean capital Santiago, guitarist Nano Stern mixes traditional sounds with rock and jazz for a fusion winning him fans as far away as Europe and Australia. Popular enough to play at Lolla­pa­looza Brazil in 2013, blues duo Perrosky brings a Chilean touch to American roots rock. Heavily influenced by the electronic beats of original New Wavers like Devo and Talking Heads, quartet Tus Amigos Nuevos adds a Latin rock aspect for something infectious and original. Wentru, new to Chile's indie pop scene, features dulcet male/female harmonies, heavy synthesizers, and slinky electronic beats that scream Eighties. – Jim Caligiuri