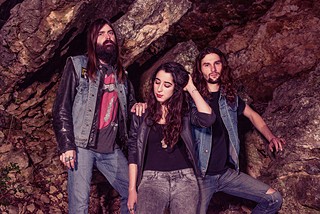 "I lived in a house that had a garage," explains Alley, "and Ian would come over and we would just sit out there at night playing around. Then we got Jason, since Ian had known Jason for a long time."

Graham, paired within the group and outside it with Alley, had experience playing other styles.

"In the beginning, I played in bands that were similar to Joy Division," he explains. "I always liked dark, broody stuff. That's the way I see music. Heavy is about the emotion behind it, or like the space in between that bleeds darkness.

"I'd always been into heavier stuff, but I was scared of trying to take that on as a guitarist because of the solos. Then I worked with friends who turned me on to Pentagram and stuff like that. I'd sit there, listen to it, and kind of reposition things in the songs. I came up with the first two [Well songs], and then it just became innate.

"I was like, 'Oh, this is what I should've been doing my whole life!'"

Dark hearts on sleeves, the local trio generates noise both melodic and powerful, accessible and rib-crushing.

"I think some of that comes from Ian and I singing together," says Alley about the pair's distinctive tandem croon. "Because our vocals just matched up really well naturally, and that gives it a different aspect."

With a seven-inch single, a well-received West Coast tour, and the First Trip EP in its rearview mirror, the band looks forward to a forthcoming LP, though the details sit under wraps. "We're talking to some people right now," says Graham. "The art's almost done. So everything's in line, but we're going to release that information after South by Southwest."

In the meantime, the Well shares its upcoming showcase with fellow travelers Kadavar, Orchid, and Scorpion Child. Call it a coming-out party for a band deserving a spot in the international heavy rock community. The band already enjoys being part of its homegrown horns-throwing society.

"In the metal scene," says Alley, "when you go to a friend's show, you can count on them to put on an awesome show, because the bands in the metal scene here are really solid bands. They're incredible musicians – no one's doing it on a lark. And then, when they come to your show, you can count on them to be right front and center headbanging, getting you even more amped up."