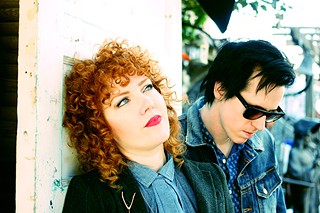 
Some six years ago, Eleanor Whitmore from Denton and Chris Masterson from Houston decided to try out living in New York. After five years, the married couple realized they were almost never home and it was costing them a fortune to keep a place in the city, so they returned to Austin last year, where it was cheaper, closer to family, and more centrally located for life on the road.

A great deal happened to the duo in the time spent mostly not in New York. Known as accompanists with acts like Son Volt, Jack Ingram, Kelly Willis, and Slaid Cleaves, they both released solo records before deciding to join forces musically as the Mastersons. In 2011, they became an integral part of Steve Earle's group the Dukes and Duchesses, the bandleader even allowing them a spotlight in the middle of his set. The following year, they self-released Birds Fly South, which was eventually picked up by New West Records. With Earle's generosity, they've won over fans on both sides of the Atlantic, while also becoming a band. Proof of that comes this spring with the release of Good Luck Charm.

"I think the new record reflects that we're a better band," says Whitmore. "When we did Birds Fly South it was like, 'Well, I've done my solo record and you've done your solo record, so let's do a record together and let's be a band.' Now we have so much more confidence. The new record is a more purpose-driven record. The songs were written specifically for the Mastersons."

The band's namesake agrees, "It's been a lot of work, but everything has fallen into place. On the new record, we sing with one voice, as opposed to the first record where it was obvious, 'Here's an Eleanor song, here's a Chris song.'"

The work that went into the making of Good Luck Charm – in between more than 100 shows with Earle – proves just how dedicated to each other and the band they can be.

"On the road we would hide out," recalls Masterson. "Like in a dressing room with our guitars."

"It was challenging," nods Whitmore, "but we had a deadline and it set a fire under us."

After Earle's tour finished in November, they came back to Austin for 10 days, then flew to California to meet with producer Jim Scott, best known for his work with American icons Wilco, Tom Petty, and the Dixie Chicks.

"Jim wanted 20 songs," Masterson says. "I wanted to work with him, so I would do what he said. For him, it's all about the songs. We ended up with 11 on the album. We felt really challenged to make the best record we could."

In March, the Mastersons tour with Los Lobos, perform at South by Southwest, buy a house in Austin, then fly to Australia and New Zealand to tour with Earle. Meeting challenges seems like what the Mastersons do best.