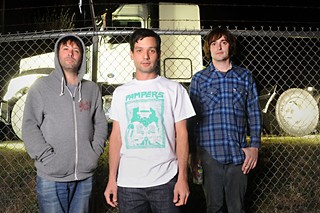 Think about the deinonychus (dy-NON-i-kus), ancestor to the velociraptors of Jurassic Park and one of the most important discoveries of dinosaur paleontology. It didn't simply spring out of the earth one day. Streamline, agile, and believed to have had feathers, they were the antithesis of an enormous fern-eater like the brontosaurus, carnivorous beasts (Greek for "terrible claw") engineered by evolution into lightning-quick lizards with a natural killer instinct. Darwinism at work.

Austin post-punk trio Spray Paint also descends from dinosaurs, literally. Its three members spun out of When Dinosaurs Ruled the Earth, the local noise-rock double everything that once broke Beerland on a bimonthly basis. Dinos died out, but the evolution of homegrown punk continued its course.

As with Cretaceous predators, Spray Paint updates its antecedent – smaller, more nimble. Snappy. It steps off the fuzz pedals and finds a razor sharpness in clean tones. Guitarists Cory Plump and George Dishner thread those modulations through delay for something subtle and sunless, downplaying Dinos' affinity for blow-out-your-earholes recordings that battered fans in later years. Atop drummer Chris Stephenson's bulleted metronome, they're both sleek and disheveled, a product of what came before but a quantum leap forward.

Dig just beneath the surface of Spray Paint's grinning skeleton and you'll find bones dating back to the earliest days of Austin punk, before When Dinosaurs Ruled the Earth to Scratch Acid and Butthole Surfers. Hear Stephenson's style-to-be on 1984 Surfers' sludge anthem "Dum Dum" and the Jesus Lizard's "Sunday You Need Love." His kicks, tone, and presence hearken back to the former's Independent Worm Saloon standard "Strawberry," whose bassline Plump might lay down on his down-tuned six-string. Or scope the clean, droney guitar carrying each verse of "Cough Syrup" from the B-Hole's Electriclarryland, 1996. Sounds a bit like "George's Theme" off Rodeo Songs, Spray Paint's second full-length.

Consider, too, that the Dinos covered Scratch Acid ("Greatest Gift"), not to mention their frantic, David Yow-derived screams. Dishner, a banshee since his days in corrosive funsters the Tuxedo Killers, follows through today with "Making Water" and "False Cowboys." And note the half-sung gang vocals à la Gibby Haynes and his fellow Surfers, who Plump idolized growing up in Indiana, where he founded ATX immigrants Awesome Cool Dudes.

"One of my favorite Texas bands ever," he nods upon citation of the B-word.

Finally, recall Houston skuzz puppets Rusted Shut, whose fully-in-the-red recording style appears in late-period Dinos. The septet, which began in 2005, had a two-LP run before whittling down to a fivepiece that threw Dishner and four incomprehensibly loud guitars at you all at once, brought about its own extinction.

"Towards the end, no one really liked us," shrugs Dishner. "That's fine. Why would they? But I liked Dinos so much more towards the end."

Says Plump: "We were as good when we were whittling down as we had ever been."

Morphing into Spray Paint happened naturally but appeared as if out of thin air. Plump, Dishner, and Stephenson clocked into a Dinos practice one day when their other two bandmates couldn't show, recorded a few tracks, and sent them off to Scott Soriano, who runs S.S. Records out of the California state capital.

"Our only three songs," chuckles Plump. "And he loved them. He said, 'I'll put this out if you're a real band. I don't do bedroom projects,' which we totally were."

"It helped legitimize us right away," says Dishner.

At that moment, Spray Paint became a band. The agreement with S.S. made the new trio's first gig – Feb. 10, 2012, at Beerland – a 7-inch release show, with another single pushed through the label that June. A tour up the West Coast and back through the mountains and I-35 corridor followed, then Spray Paint retreated to the studio before emerging Feb. 2013 with an eponymous full-length that went down like nose whiskey. Another tour and a spot at Chaos in Tejas in late spring signed them off until 17 gigs in 18 days across 15 North American cities in September. They debuted at Fun Fun Fun Fest a month later, and in December released Rodeo Songs on S.S. Records, their second LP of 2013.

That's a breakneck pace for any act, much less one comprising members who each maintain second endeavors. Plump helps run Austin's Monofonus Press and screen prints for Bearded Lady; Dishner, the son of Chronicle co-founder and film production manager Joe Dishner, does freelance set design, and is often unavailable for weeks at a time; and, in addition to Spray Paint, Stephenson drums and tours with Dikes of Holland and Massageinist.

"That's the main goal," says Plump. "Urgency. Working fast, working urgently. We thrive on deadlines: 'He's going to be gone at this point, so we're going to be dead for a month here. We need to have shit done before then.'

"Thriving on deadlines is how we get shit done, and gives a quality to the music that's not too overwrought."

The first weekend of this month, the band recorded 10 songs while booking gigs for South by Southwest (their second). In April, they'll tour with Detroit's Protomartyr. Plump anticipates an album shortly thereafter, then a tour of the Pacific Northwest and some August dates recording in San Francisco with Chris Woodhouse, whose nose for garage nuggets emanates via Ty Segall and Thee Oh Sees.

"We're kind of amazed that people are into us in the first place, but we know it's got a shelf life," says Dishner. "We might as well get product on the street as quick as we can."

They hope to get to Europe in the fall, something no member's done with any other band and all three of them now on the other side of 30. The next LP will appear on Monofonus instead of S.S., the band citing increased tour support and a heightened willingness to hire European publicity and the necessary driver and interpreter in addition to proper distribution.

"We're going to explore every option that we can and work very, very fast," concludes Plump. "While there's a few people interested, we're trying to get as much done as we can. Rock music is not an old man's game." 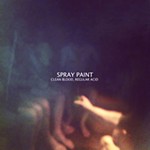