SXSW begins giving up her secrets.

Beginning Monday with news of Blur/Gorillaz svengali Damon Albarn and guitar muse St. Vincent topping an NPR showcase at Stubb's on Wednesday, March 12, South by Southwest finally cracked open its Pandora's box of marquee names for the 28th annual spring campaign. Two days later, at 7:30am, the Festival's Music arm pulled back the curtain on ACL Live at the Moody Theater, about which there had been rampant speculation. With good reason, it turns out: Apple's London-based iTunes Festival, which began in 2007, loads in for five nights of a SXSW iteration. Only three of five bills were revealed, with Coldplay, Imagine Dragons, and London Grammar on Tuesday, March 11, followed by Pitbull, Zedd, and G.R.L. Wednesday, and Keith Urban and Willie Nelson leading Saturday night. As to whether Miley Cyrus, whose tour schedule places her in the area that week, might appear in one of the other slots, SXSW made it sound unlikely.

"We haven't had any contact with her or her 'people,'" writes SXSW Music GM James Minor. "Nor have we heard anything about her being attached to a 'secret' guerrilla show."

Those weren't the only names emerging this week. Also trending were recent Austin Music Hall sell-outs Young the Giant, stony NOLA MC Curren$y, and "Pumped Up Kicks" band Foster the People, who headline the Friday, March 14, free concert in Butler Park. A group of Stax Records vets, including organist supreme Booker T. Jones, bring Memphis to the park the following day, where they'll be joined by rappers – possibly including Snoop Dogg, who appears in SXSW Film premiere doc Take Me to the River. Those shows require a free "guest pass," available at Waterloo Records, Whole Foods, Spec's, etc. See guestpass.sxsw.com/#about.

Speaking of SXSW Film, expect significant overlap with Music. Pasty Beaumont blues legend Johnny Winter, 70 on Sunday and subject of new doc Down & Dirty, will perform. Pulp singer Jarvis Cocker, focus of Sheffield: Sex City, will also put in an appearance, and don't be surprised if A$AP Rocky shows up to hype his rise-to-fame chronicle SVDDXNLY. Also showing: Leave the World Behind, the swan-song tour-doc about DJ trio Swedish House Mafia, who have no SXSW plans, according to their label.

"I wanted to focus on the younger generation," revealed organizer Rich Garza, whose 2014 bookings lack veteran acts like Flaco Jiménez, Celso Piña, and Los Lobos, all of whom played last year. "There's always room for legends, but I've been thinking long and hard about who Pachanga's audience is and, demographically, it's a youthful group."

"I'm now envisioning Pachanga as a party instead of a festival," explains Garza, citing not financial concerns, but rather festival fatigue. "With so many festivals in Austin, it's a lot to ask for people to give up a weekend. I want one day with a great vibe."

Discharging a combustible set of electro-punk, local trio BLXPLTN bridged the gap between two hip-hop acts at Holy Mountain last Saturday. "Black music is black music," bassist/vocalist Jonathan Horstmann assured the audience between songs. Afterward, outside the club, he went further. "Austin doesn't like to talk about it because of its progressive reputation, but minorities are extremely underrepresented in every scene, especially the music scene." 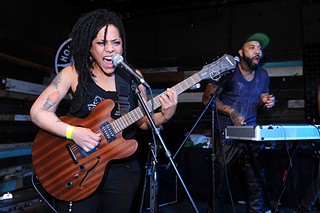 "We want to project to people of color that you can do whatever you like," offered the heavily tattooed, black-clad band's drummer/vocalist Taszlin Muerte. "You don't have to rap or dress or speak a certain way, and don't be ashamed of being smart."

"And we want kids who look like us to pick up guitars and do what we're doing," adds guitarist/screamer Khattie Q.

Taking form last spring, BLXPLTN stands out both for its future-sound take on Eighties American hardcore – compete with live electric drums – as well as effectively capturing an attitude that's both hostile and inspiring. They've hit the studio with assistance from Trail of Dead's Autry Fulbright, Mars Volta key-pusher Ikey Owens, and Ringo Deathstarr's Elliot Frazier, so look for recordings in the near future.

Until then, they have stages to level, including Mohawk Friday and Beerland Wednesday.

› Cheering up Red River: LGBTQ hot spot Cheer Up Charlie's held a soft opening at their new 900 Red River digs on Sunday and will host grand opening festivities this weekend with bills that include White Walls on Friday and Riders Against the Storm plus Nakia DJing on Saturday.

› Punk icon Exene Cervenka told Rolling Stone she's moving to Austin. "I have tons of close friends in Austin, I love the music, [and] I always have a magical time there," enthused the X vocalist, adding that she considers California a "liberal police state." "It makes me happy when I see people in Texas open-carrying. It makes me feel safe. I'm not even a gun owner, but I'd like to see a gun rack in every pickup truck."

Something special was happening at 12th and Chicon last Sunday. The hard-luck corner felt especially vibrant as the sounds of drums and distortion rang from two buildings and music fans milled between the Legendary White Swan and a new venue, Badlands. It was a glimpse of vitality for a strip with major entertainment potential that's long been a question of "when," not "if." Now occupying the building at 1203 Chicon – which was formerly a nondescript BYOB pool hall – Badlands hosted ska veterans the Toasters, revealing a no-frills, midsized room that will welcome Texan metal legacy Deadhorse on Feb. 28. The space, which holds everything from performance art to drag shows, is part of a larger complex at 1900 E. 12th, including the Romani Gallery, a gift store, and a tattoo parlor. Shane and Shannon Howard, along with partners Sean Boyle and Matt Donham, took up residence on the notorious block – where sits Club 1808 and the recently shuttered Club 40 – in October and have a five-year lease. Ray Valentine, who manages and books the neighboring Legendary White Swan, is pleased to have the arts complex next door. "We'll all benefit with more people traffic in the area."