Future country outlaw Rusty Wier, drummer and frontman for Lavender Hill Express, out back of the Vulcan (Courtesy of Layton Depenning)

If the aural history of Austin music resembles a sprawling tabletop jigsaw puzzle, its center – Willie Nelson, Armadillo World Headquarters, Stevie Ray Vaughan – remains fairly complete with a few outstanding holes. Yet the frame, one that seems easy to assemble with its linear border, features gaps of outstanding significance.

Maybe that's because so many books on the storied local scene tend toward the coffee-table variety, lovingly staged portraits of favorite musicians and/or dazzlingly lit images of the town's storied nightlife in action. The keepers are often the more modest revelations like Michael Corcoran's CD-book package on turn-of-the-century pianist Arizona Dranes (revisit "Raising Arizona," Oct. 26, 2013), which introduced the blind gospel singer not only to Austin, but to the world at large, while reminding all comers that musical education is vital to children.

Ricky Stein seeks that same brand of rawhide authenticity in his new book Sonobeat Records: Pioneering the Austin Sound in the '60s. What began as a casual conversation with a colleague during his internship at KLRU turned into a deep immersion in the roots of Austin's recording history in the Sixties – the eventual topic of his American studies thesis at UT. From where, wondered Stein, did the impetus for the Texas state capital as a musical force originate? He found a cornerstone in Sonobeat Records.

Born in 1967, the year the Vulcan Gas Company opened on Congress where Patagonia now occupies the space, the label folded in 1976 as America celebrated its bicentennial. In those nine years, Sonobeat Records documented the changing face of Austin – and Texas – music. The indie sought not only to record the young rock bands of the era, but to capture the live aspect of a broad spectrum of music from jazz and hotel music to club house bands.

"An innocuous conversation ended up a published book," marvels Stein. "The fraternity scene [for example] was a real revelation to me. [Contributing photographer] Layton DePenning says that was the scene before there was a scene, and the way musicians paid their bills. It was a party scene with dance bands, no artistic pretensions about it. They just wanted to have a good time." 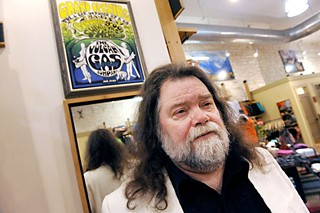 And a good time was had, "they" being the local high school and college kids of the Sixties. In a phenomenon that occurred 50 years ago and has never been repeated since in popular music, the world changed overnight in February 1964 with the Beatles' U.S. tour and television appearances. Elvis shook it up a decade before, but not until the British invasion did hip-shaking assimilate itself into popular culture. Across the nation, the kids just wanted to rock and roll.

Enter the long-overlooked father/son team of Bill Josey Sr. and Bill Josey Jr., founders of Sonobeat Records. Both worked for popular FM station KAZZ, where Josey Sr. served as station manager in 1965 and the younger Josey later held court on the airwaves as disc jockey "Rim Kelley." A younger son, Jack Josey, eventually joined the on-air family, yet Sonobeat's dynamic sense of what was hip to record lay between Josey Sr. and Josey Jr.

It sounds impossibly dated now, but Bill Josey Sr. revolutionized the listening experience of Austin youth when he initiated live broadcasts from the Sheraton Crest Motor Inn (now the Radisson) on Lady Bird Lake. A two-microphone mixer allowed him to speak into one mic while the other captured the music. A direct phone line connected them back to the studio. This format led to acts such as Roky Erickson's psychedelic pioneers the 13th Floor Elevators being broadcast into suburban homes from such places as the New Orleans Club, 11th Door, Club Saracen, and the Jade Room.

The rising popularity of local rock bands such as the Sweetarts (with contemporary scene veteran Ernie Gammage) and Lavender Hill Express (starring the late Rusty Wier) provided the Joseys with a wealth of homegrown talent to launch their new venture Sonobeat Records in 1967. The Lee Arlano Trio, Vietnamese singer Bach Yen, and jazz vocalist Fran Nelson added traditional appeal to the stable, while James Polk & the Brothers and Afro-Caravan deepened the label's roots.

Some projects played into the Joseys' hands like vinyl kismet. An article on Texas music in a 1968 Rolling Stone, featuring photographer Baron Wolman's iconic portrait of Doug Sahm on the cover, proclaimed Beaumont-born albino guitarist Johnny Winter "the hottest item outside Janis Joplin." The Joseys were well aware of Winter's blues prowess, having recorded the LP that introduced Winter to the world, The Progressive Blues Experiment. Never mind that the recording took place at the Vulcan Gas Company during the day and that the "audience" consisted of the Joseys and Vulcan artist Jim Franklin, with Winter, future Double Trouble and Arc Angels bassist Tommy Shannon, and drummer Uncle John Turner performing. The Progressive Blues Experiment became a landmark for Winter and stands as Sonobeat's lasting legacy.

"Winter's career just took off," reports Stein. "The Progressive Blues Experiment album Sonobeat recorded at the Vulcan went on to major label distribution with Liberty Records and a bidding war ensued for his next record."

The 128-page book contains a few common but minor errors: A photo of the old tour bus that once decorated the Broken Spoke parking lot is identified as Bob Wills' bus, yet the Flex Cruiser belonged to Western swing band the Texas Top Hands, whose name painted the front. Another short-lived but significant local label, Domino Records, sees its chief act the Slades misspelled as "the Slates." And because the slim tome originated as a thesis, the tone occasionally comes across as pedantic.

None of these quibbles negate the impact of this publication. Sonobeat Records connects the nascent Austin music scene of 50 years ago with the bustling circus it is today. Stein includes interviews from participants like Wali King, leader of Afro-Caravan, who points out one of the most salient reasons for the spotlight being turned on Austin in the mid-Sixties: President Lyndon Baines Johnson hailed from Texas.

"With LBJ coming in behind Kennedy," comments King, "and him being the person that was pushing all the Great Society things, Austin was kind of one of those places that felt like they were a direct representative of LBJ. And as a result of that, the town had much more of a liberal attitude."

Stein also champions Sonobeat for its expansive approach to the varied genres the label recorded.

"What also interested me was the Eastside scene of the same time," explains the author. "There's been literature about it, but not as much attention paid to it as, say, the Vulcan scene. That's a credit to Sonobeat. They had so much diversity in the acts they recorded, like the Afro-Caravan and James Polk & the Brothers alongside releases by the Sweetarts and Lavender Hill Express. Afro-Caravan could play Eastside joints and the Vulcan. They fit both scenes equally."

In retrospect, Sonobeat's output sounds limited – 24 vinyl singles and two full-length albums – but bear in mind that the talent pool was considerably smaller in those days. Bill Josey Sr.'s dogged belief in what the label recorded remained strong and committed, even after the younger Josey married and moved to Houston in 1970.

When the end came in 1976, and because he dedicated himself to the art of recording music instead of making profits, the patriarch lay in his casket in a blue polyester leisure suit. It was the only suit Bill Josey Sr. owned.