Born from a recurring childhood nightmare, Glass Eye bassist/producer Brian Beattie's aural epic about a 10-year-old girl who falls down a hole into Hell percolates with the delightfully twisted ethos of its forebearers. Like Alice in Wonderland and The Wizard of Oz, Ivy and the Wicker Suitcase uncorks a children's story that doesn't soft-pedal fear and discomfort. Ivy Wire lives with her widowed mother on the outskirts of Austin circa 1938, but they're about to lose the house because the former's drifter dad took out a mortgage lien before he was killed. This is the stuff heroines are made of naturally. From snap-crackle singsong ditties ("Caliche Road") to throaty, Lucinda Williams-style scorchers ("Iron Skillet"), local teen dynamo Grace London vocalizes Ivy with the perfect mix of tenderness and resolute bravery. Glass Eye guitarist Kathy McCarty channels the traditional Texas woman archetype as Ivy's mom, with her tango-style upbraiding on "That No Account Cosmo Wire" providing a high-drama highlight. Hank Williams-channeler James Hand summons qualified redemption as the not-so-dearly departed Cosmo, so don't fight the lip quivers as he serenades Ivy with the woeful "Sorry Won't Mend the Trouble I Made." In a perfect piece of stunt casting, Daniel Johnston plays the Devil as a quirky, even sympathetic evildoer (the smoldering "Nobody Understands Me"), while Bill Callahan intones supreme deity Everything with benevolent somnambulance. Finally, Okkervil River's Will Sheff turns up as an underworld bureaucrat whose officiousness belies his three-headed appearance. Beattie's music carries the story both playfully and provocatively, juxtaposing snatches of avant-rock and classic country with cabaret and cartoon scores. Artist Valerie Fowler, Beattie's wife, matches up with exquisite illustrations of Ivy's plight. Highly imaginative and unapologetically local in flavor, Ivy and the Wicker Suitcase packs a children's album for the ages. 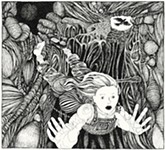