Over the past year, doom/psych power trio the Well evolved from promising newcomer to essential cog in the local scene. After a triumphant set opening for American Sharks last week, the band ran its own victory lap at Holy Mountain. Guitarist Ian Graham plays riffs so sweet they're sensual, while charismatic bassist Lisa Alley rolls thundering grooves like a storm. "Mortal Bones" and "Eternal Well" aren't all deep kisses, though – the band knows when to abandon romance and just fuck hard. The pair's dual vocals give its songs extra spice, but the riffs rule the melodies, and the attack thrusts them home. "Fuckin' sweet," declared a crowd member after the Well finished sealing its fate as the next ATX act to watch. Most of its gig partners proved themselves worthy contenders as well. Preceding young duo Carl Sagan's Skate Shoes vacillated between anthemic grunge and SST-inspired punk & roll, including a Minutemen cover. Spiritual Wives boast refugees from ... And You Will Know Us by the Trail of Dead, Tia Carrera, and Pack of Wolves. Rather than a psychedelic black metal mindmeld, however, the quartet pays homage to Fugazi, Quicksand, and Jawbox, gleefully reviving Nineties noise rock. Psych trio Bridge Farmers emphasized frenzied jamming, and a good thing, too, as its vocal presence was weak. Sadly, neither band had the goods to hold the considerable crowd the Well left behind. 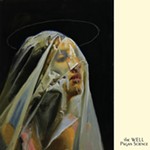 Bridge Farmers' Superior Acid Metal
Hawkwind and Sabbath didn't spawn the Austin trio, but they should have