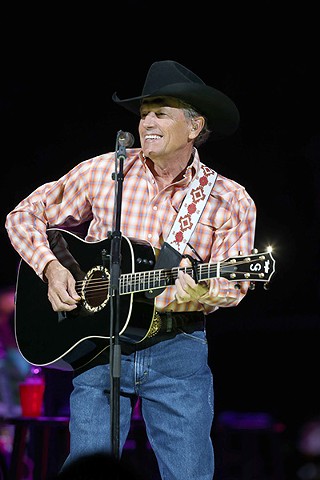 
"I was a young troubadour when I rode in on a song, and I'll be an old troubadour when I'm gone," declared George Strait on "Troubadour," a raw, rich twang near the end of his two-and-a-half-hour set Friday at the Frank Erwin Center. The 2008 hit served as keynote to Strait's final live go-round, dubbed the Cowboy Rides Away Tour, which culminates in Dallas this June.

With the screens above him flashing photos from his storied career throughout the song, Strait looked up and watched with an amused smile, the same genuine, crooked country grin peering out beneath a cowboy hat at 61 as the hungry kid brashly branding his traditional style on 1981 debut Strait Country.

Though popular country music may have changed drastically over his 30-year tenure as the King – evidenced by the dramatic contrast of current radio superstar Jason Aldean's emphatic spectacle of an opening set – Strait remains the genre's compass, last year marking his 60th No. 1 hit. Even with a 33-song set list (see the online version of this review), the Poteet native could still only skim the depth of his catalog.

Performing in the round with the 11-piece Ace in the Hole Band gathered centrally, Strait worked each corner of the stage in two-song segments with no flash or hurry. The opening round marked a steady string of familiar staples, running through "The Fireman," "Ocean Front Property," "Marina Del Rey," and "Easy Come, Easy Go" as he pulled both plaintive and playful with the long-sold-out throng singing along.

Aldean reemerged to join Strait on "Fool Hearted Memory" and "Nobody in His Right Mind Would've Left Her," both songs doing credit to the younger songwriter more than his own set could. Afterward, Strait needed little help stirring the rafters with the double punch of the poignant "You Look So Good in Love" followed by a winking "How 'Bout Them Cowgirls."

Perhaps most remarkable was the vibrancy of the singer's voice throughout the epic set. Though each song arrived with a consistency that matched its familiar studio version, his vocals remained equally sharp and subtle, whether diving low and textured on "Drinkin' Man" or smoothly drawled on "I Can Still Make Cheyenne."

Strait proudly highlighted several songs written by his son, including "Arkansas Dave" from 2009's Twang, and featured a couple of new tunes from last year's underrated Love Is Everything ("I Got a Car," "Give It All We Got Tonight"). The set rounded into fan dedication "I'll Always Remember You," while "Troubadour" brought the farewell show to its climax and full circle with Strait's first single, 1981's "Unwound."

Providing a four-song farewell encore to the Austin stage he estimated to have played 15 times, Strait delivered a requisite "All My Ex's Live in Texas," and finally allowed the band to break down into a jam of Johnny Cash's "Folsom Prison Blues." Strait then bid goodbye with "The Cowboy Rides Away," curiously sliced by the band with a riff from "Suspicious Minds" and the instrumental coda to "Layla" that may have been one retiring king paying homage to another.