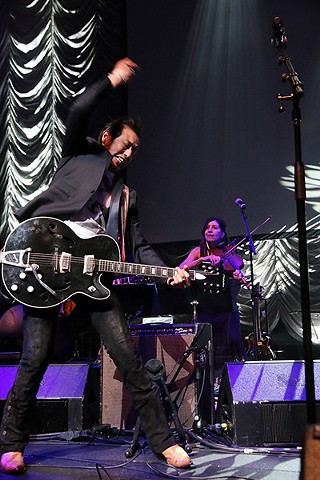 
Introducing his curated tour through Austin music history, Alejandro Escovedo warned that no presentation on the subject could be justifiably comprehensive. Nevertheless, Austin's ever-ambitious pater familias threw everything he and his parade of stars had into a three-and-a-half-hour oral/aural soundscape.

The Bells of Joy initiated the show with their 1951 gospel hit "Let's Talk About Jesus" before Flores and Hancock duetted on "The Austin Waltz" and Steve James tore into Alfred "Snuff" Johnson's "Hobo Blues." Ephraim Owens and Elias Haslanger joined Polk to explore the jazz heritage with "Buffalo," while Williams' new Janis Joplin-inspired "Port Arthur" and the Lubbock contingent of Allen, Ely, and Hancock hearkened the Sixties songwriter scene. Closing out the first set, Erickson emerged for "Two Headed Dog" and, with Williams joining, "Starry Eyes," the latter better conceived than executed, but nonetheless an exceptional moment.

Punk's seismic shift erupted with the Skunks performing "Earthquake Shake" and the Hickoids assaulting the Dicks' "Dead in a Motel Room," Escovedo following up with the gleeful abuse of Butthole Surfers hit "Pepper." He and his True Believers comrade Jon Dee Graham then unleashed the latter's 14-year-old son, William Harries Graham, in the Painted Redstarts, which with fellow scion Marlon Sexton unleashed marching Troobs cover "She's Got." Alejandro Escovedo's homegrown vision of the past ensures Austin's future.