Grace London, as Ivy Wire, falls into the Underworld.

Book retailers and record stores stocking Brian Beattie's latest project might have to create a new section labeled "Illustrated Audio Drama Musicals." The local musician, who gained notoriety with New Sincerity rockers Glass Eye before going on to produce the Dead Milkmen, Daniel Johnston, and Okkervil River, creates his own genre with Ivy and the Wicker Suitcase, a dialog-heavy musical on CD in an illustrated book. The cast's singers include Johnston, Okkervil's Will Sheff, Glass Eye's Kathy McCarty, Bill Callahan, James Hand, and 14-year-old Grace London.

"Every single person in it is the person I originally conceived for the part," smiles Beattie.

Except for Grace London. The story was written about a little boy until Beattie witnessed London, then just nine, performing an old blues tune at a local elementary school talent show. Astonished by the former Residual Kid vocalist's talent and charisma, Beattie rewrote the script with her as the lead.

Ivy and the Wicker Suitcase, set in 1938, centers on Ivy Wire, a guitar strumming Texan whose mother stands to lose their home to the bank. When a flash flood washes the youngster into the underworld, Ivy encounters hell's three-headed admissions officer (Sheff), her deceased father (Hand), the Lord of the Underworld (Johnston), and, ultimately, a mellow-voiced supreme deity known as Everything (Callahan), all while trying to make it back to Texas and save her home. Imagine The Wizard of Oz combined with "The Devil Went Down to Georgia."

"It was fun to work with someone who was totally gifted because I'm an amateur at directing actors," says Beattie about his lead. London steals the show, no doubt, but the theatre skills of the other cast members can be charming as well.

"Look girl, I am just as sweet and sensitive as you are! Notwithstanding my gnarled appearance, I am a delicate soul and I have sensitive, subtle feelings as well!" recites Johnston with trademark awkwardness.

"Everything is cynical or ironic these days," shrugs Beattie. "I didn't want that. I wanted to make something delightful."

Beattie, London, and McCarty sing songs from Ivy and the Wicker Suitcase while Fowler presents scrolling illustrations at BookPeople on Saturday, 5pm.

Yet another musical instrument shop vacated South Lamar as Musicmakers waved the white flag on Dec. 31. Owner David Baldry cited a big-time rent increase, not a decline in business, as the rationale behind closing the store he opened 25 years ago. For those counting, that's the third music retailer to split the strip after Ray Hennig's Heart of Texas Music closed and the neighboring Austin Vintage Guitars was forced to relocate when the plaza they shared was redeveloped in 2012. That leaves only Tommy's Drum Shop and South Austin Music in an area once dense with music stores.

"We've had a really good year," reported Clint Strait, third generation operator of the family business, which recently landed a profitable Gibson contract. "Certainly some of that has to do with our close competition moving and somewhat because we've been making good business decisions like this."

Meanwhile, the Eastside has gotten a badly needed guitar shop with Street-Legal Guitars, who just signed a three-year lease at 2200 E. Seventh. The boutique, owned by former Strange Boys guitarist Greg Enlow, boasts a crafty collection of used axes and amplifiers and also does repairs.

Uptown, Austin Vintage Guitars owner Steve Fulton confirmed that construction has begun on the building he bought at 43rd and Red River. While sales at his Burnett location have been solid, the rent's killing profits. He hopes to have AVG's permanent home ready this spring.

Cheer Up Charlie's owners were already making moves to lease the old Club de Ville property when they received the eviction notice from their East Sixth home last month. What was initially thought to be a location for a second bar became the new Downtown home for the queer-friendly East Austin hotspot.

"It was weird and stressful, but it worked out," sighs owner Tamara Hoover, who confirmed that she's signed a five-year lease with a five-year option at 900 Red River and expects to open the new Cheer Up Charlie's location in late February. Booker Maggie Lea promises CUC will remain a mostly free music venue and continue to curate offbeat events that appeal to their existing clientele.

This weekend, CUC says goodbye to the old grounds on East Sixth with a concert series entitled "The Glass Elevator Shoots into the Sky," in reference to the book Charlie and the Chocolate Factory.

"When Charlie gets in the elevator, his next big step is taking over the chocolate factory," explains Hoover. "That's what we feel like we're doing."

On Sunday, the club's final night, dark soul rockers Midnight Masses perform, then morph into their sister band ... And You Will Know Us By the Trail of Dead.

› Local synth pop sirens Feathers begin a nine-date tour as direct support for Depeche Mode next week. "They're a band that's had a huge impact on how I write music, hear harmonies, and in shaping what I want to see from a live performance," glowed Feathers vocalist Anastasia Dimou. It's a huge break for the unsigned band from Austin, handpicked by the pioneering UK electrolytes after opening for them at SXSW 2013. "We're very lucky," Dimou stated. "The smallest arena on this tour holds 20,000. I'm preparing to be rattled to the bone." Feathers, which released its debut last year, drops an EP this month.

› The city of Austin instituted a new comprehensive application for special event permits on Monday. This means less paperwork for prospective party throwers and more control for the city to monitor events. Monday's press release noted that the city manager can suspend all permitting if it's determined that the number of events exceeds the public safety resources, which of course happens every year at SXSW.

› The Octopus Project plays an intimate show at the Spider House Ballroom on Wednesday. Entry to the Red Bull-sponsored, Good Music Club-curated concert is just $3 – roughly the same price as a can of Red Bull.

› The Austin Songwriters Symposium is underway. Workshop your tunes, talk publishing with experts, and dig the keynote interview with Flatlanders duo Jimmie Dale Gilmore and Butch Hancock. The five-day event runs through Sunday at the Holiday Inn Midtown, $295.

More Ivy and the Wicker Suitcase 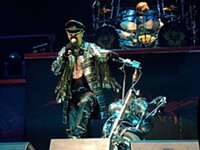