Wild Bill has himself a musical 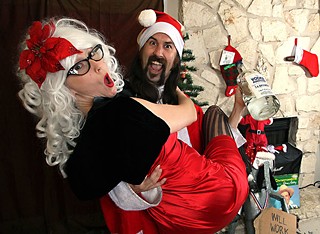 One time, I showed up to Antone's and told Wild Bill I wanted a part in his Christmas show.

A year earlier, maybe, my buddy Paul arrived at Wild Bill's birthday party, asked what he could do to help, and was instructed to guard the bathroom to make sure people only passed water in there. Three hours he did that.

During his happy-hour residency at Flipnotics, Wild Bill once stopped his show mid-set and made everybody in attendance walk outside. There, he orchestrated a contest to find hot dogs he'd hidden on the hillside venue's many decks. The dogs themselves were decorated with google-eyed faces and doubled as the estranged children of Wild Bill's ukelele player, Future Dog, who'd dressed for the show as a hot dog of the future.

Today, the 35-year-old man born Bill Ogden and I are in the kitchen of his ranch-style funhouse in South Austin dicing deviled eggs in preparation for an egg-eating contest he's hosting between a bum and a bandmember at Flipnotics.

"I don't like deviled eggs," he says from behind his long black hair and Fu Manchu mustache. "I don't eat them. I'm just fascinated with how gross it is to watch other people eat them.

"We started passing them around at shows. Now we do contests."

Everybody in this town's a songwriter: your bartender, your boyfriend, your banker. Ogden is, too, but in the context of Wild Bill, everybody else sounds the same.

Raised in Tulsa, he acclimated to the Okie mean through Red Dirt country rock, but he always envied Beck. He met Amanda during his senior year in Stillwater, following that up with graduate school until her bachelor's was completed, then stuck around while she picked up an MBA as well. They drove to Vegas a week after she graduated in 2004, got married in a fever, and drove straight to Austin.

The two bought a house off Slaughter Lane, and Wild Bill's all over the place – the walls, the windows, the mantlepiece. There's a Don King wig on the big Peavy speakers in the living room – move the Darth Vader mask if you want to sit – and check out the light-up sign announcing his band, the Lost Knobs, in a corner of the garage. A noosed baby Santa hangs out of a closet in the hallway. No need to wonder where Wild Bill derives inspiration.

"I'll be a slaughtered female monster, and my wife will be me. And we'll kill each other, and the mystery will be born of who killed Wild Bill," he pitches.

In two offices down the hall, he's cooked up 13 projects, only one that's been released: a Halloween special; an interpretive dramatization of Beck's sheet music assembly Song Reader; a comic book illustrating the sacrificial-lamb-gone-awry story of his first band, the Burnups, a punk trio who couldn't sell their souls to the devil in exchange for real chops because they'd pawned each off to a bum for street drugs in a drunken stupor that week; and the Christmas special, Honky Tonk Holidaze, filed and copyrighted July 1, 2012.

"Amanda forced me to clean this room, and it almost caused a nervous breakdown," he says. "This room has been completely hoardified, but you can see all these papers are arranged in stacks. I know where everything is. I don't need to put it anywhere. I can put it into more piles and put it away, but then I'm just going to have to re-memorize everything."

Summarily shoved out of corporate and down to one household income, fired after a cup of coffee as a tax accountant at Freescale Semiconductor, a microprocessor plant stationed at three points around Austin, Bill turned his attention toward two bands: the Burnups and Sin Pantalones, which, well, you can imagine the garb. Once the former blew up and the latter went to tatters, alt.country amalgam the Lost Knobs incorporated everything and anyone. I saw him rope in a kid named Ryan the Caveman, who had shown up to Flipnotics with a keyboard and little clue, into every facet of a show, including the skits. It continues to this day, in fact, almost always for happy hour on Fridays.

It's there that old, weird Austin comes together, where dads, daughters, and bums all sit in a row and admire a song and dance about a sexually suggestive Wolfman ("I'm a lover not a biter, see/I'm a lover, don't Tase me"), and a ghost named Clyde who got so high he died.

"Toni Price at the Continental Club," references Bill as we add food coloring to the yolks of the deviled eggs. "Hear my songs and be all about the music, but we're also going to take a break, get high, and be cool to one another. It's an almost churchlike experience.

"Us, we're like Cheech and Chong. We're the old stoner South Austin that nobody's really doing these days."

In truth, nobody's doing anything close to Wild Bill. In two weeks it'll be Christmas. Last year, Bill gifted his audience with Honky Tonk Holidaze, a 15-person, 30-minute musical production about Santa Claus' ugly, alcohol and "magic-dust"-riddled divorce from Mrs. Claus and the Big Man's subsequent journey down to Texas, where he gets mixed up with the wrong Santa for Hire broker and – gasp! – gets framed for a child's murder.

The show featured "acting" and musical contributions from any number of players seen around town each night – singers Jacob Jaeger and Kelly Galvin; the full cast of Whiskey Shivers – but this year, touring demands that they be replaced by an amalgamated assembly. Last year, the production went up and tore down three times in two weeks. At one of them, in the packed East Austin honky-tonk the White Horse, the crowd up front sat cross-legged on the floor.

"The play was me wanting to take things over the top," explains Bill. "I was writing original Christmas songs and thought it would be really funny, this sad, bad Santa."

With Holidaze, Bill discovered he had himself a production, the manifestation of those spur-of-the-moment ideas he'd conceived in South Austin.

"People ask me what I hope to achieve or accomplish," he says. "I try to get people to let loose. That's how I deal with my shit, and I make music that I hope helps people deal with their shit. There are no rules to making that happen." 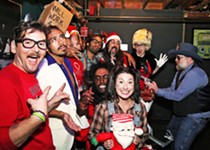 Playback
Austin's version of 'Bad Santa' at a bar near you