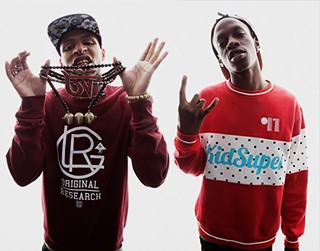 "People talk about us bringing the Nineties back, but if anything we're trying to bring the Sixties back."

"I don't really, really trip anymore, but me and my friend from the [Flatbush] Zombies spent like four years straight on psychedelics and going on adventures. You outgrow things. I'm not at home every day tripping on LSD and writing raps and shit, nah. I'm definitely high as fuck though. I definitely smoke a lot of pot."

To wit: "Herb Shuttles," their best known cloud rap. They may be blazed, but Underachievers represent the Beast Coast movement alongside fellow Brooklyn up-and-comers Pro Era and Flatbush Zombies.

"It's a huge family. We've known all those kids since we were younger. From the outside it might look like all these crews are teaming up to be a powerhouse, but in actuality it's little links that make it the real deal, way beyond the music."