Venomous Maximus (Sat., noon, Black stage) Houston squadron warms up for LP No. 2 by blasting through its occult metal nightmares.

Unlocking the Truth (Sat., 12:50pm, Black stage) Though its members are only 12 years old, this Brooklyn instrumental metal trio is far too skilled for teen novelty.

Slayer (Sun., 8:30pm, Orange stage) The speed metallers had a shitty year, separating from Dave Lombardo and losing Jeff Hanneman, but should work out its rage in titanically loud fashion. 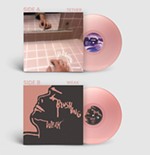