"Everybody know it was too early," laments the onset of Austin's most anticipated rap album ever. "All I can say is, nigga, I'ma miss you forever." The late Esbe da 6th Street Bully conceived the League of Extraordinary Gz in 2010 as a conglomerate of local hip-hop crews Dred Skott, SouthBound, and Da C.O.D. Released two years and one day after his death, the group's official debut full-length follows an arsenal of mixtapes as both tribute to Esbe and a pledge to carry the torch. Opening salvo "I'm Alive" unfolds a defiant celebration of life anchored by rumbling horns from Grupo Fantasma: "We ain't supposed to make it past 25/ I'm still here, oh are you surprised?/ My brother dead, bitch, but I'm alive!" Beyond mortality, Esbe growls he's "a motherfuckin' menace" on posse cut "Barz," a verse proving LOEGz lost not only a comrade when he died from a pulmonary embolism in 2011, but a certified beast on the microphone. Esbe reappears alongside Reggie Coby (the League's RZA, if you will) on the deep Southern soul of "$4 Blues," an everyman testament to the struggle to stretch paychecks, plus "Space Kush," trading bars with Tuk da Gat on a ganja-filled intergalactic joyride. Lowkey does a ton of heavy lifting throughout, pushing weight on "Billie Jean," a furious head nod breaking down triple-beam economics. Scene godfather Bavu Blakes offers some parting wisdom on "Smile" with melted butter flow as Grupo horns splatter SpottieOttie. The real coup lands verses from stic.man and M-1 of Dead Prez on "Still Bigger," a worthy sequel to one of underground hip-hop's most iconic anthems. Put your L's in the air, ATX. #LeagueShit arrives as a local landmark. 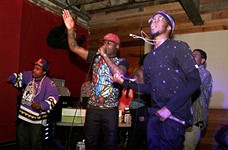