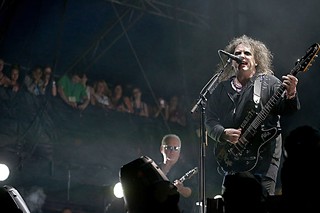 Robert Smith early into the Cure's second-weekend ACL Fest set – before he called down the rains. (Photo by Gary Miller)

This year will go down as an unprecedented year for the Austin City Limits Music Festival. It was the first time the event spanned two weekends, and the first time organizers had to throw in the towel on account of weather.

"Guest list and the weather. That's all we care about right now," chuckled Attal.

"What does happen if it rains?" asked Gray.

"You get a little wet," added Jones.

That attitude proved a colossal underestimation last Sunday as the low-lying parts of the Great Lawn were doing the back stroke, thus causing ACL's last day to be canceled. That's not to say the new two-weekend model wasn't a success. It was.

Like many, I'd originally met the idea of a Coachella-style double weekend/same lineup for ACL with skepticism, thinking it the ultimate sell-out move – throwing the party twice to double the money. Supply and demand proved C3 right, however: There was enough interest to sell out the festival twice. The first weekend sold out immediately, while the second sold out last Wednesday. At 75,000 people per day multiplied by six days – well, you do the math.

As the first weekend went off without a hitch (except for some minor generator problems), the second was shaping up to be the better of the two parties. We saw more onstage collaborations, including Queens of the Stone Age frontman Josh Homme guesting with Arctic Monkeys; Bon Iver's Justin Vernon playing lead guitar for recent production project the Blind Boys of Alabama; Carolyn Wonderland trading licks with Hollywood soul fireplugs Vintage Trouble; and Wild Child violinist Kelsey Wilson joining fellow local Shakey Graves, who absolutely packed the BMI stage.

We also witnessed more enthusiastic performances. UK buzz band Savages were notably more intense the second Friday, with singer Jehnny Beth taking to the audience to sing "Don't Let the Fuckers Get You Down." Haim vocalist Este Haim also broke down barriers the second time around, kicking off her boots and embarking on a lengthy stroll through the Saturday afternoon crowd.

Undercard acts that generated buzz with impressive weekend one performances saw returns in weekend two. Canadian blues tornado Reignwolf, who also made waves with a midweek gig at the Continental Club, observed that his crowd had tripled at the second ACL. He celebrated by splitting one audience member's forehead open with his guitar.

Indeed mass scalping for the double-run created a rock-bottom black market economy where three-day wristbands sold for as low as $50, making 2013 the most accessible ACL yet and no doubt contributing to the high percentage of locals at the second weekend.

The first drops of rain hit Friday at 7:30pm, prompting QOTSA's frontman to declare, "It's too late to turn back now," and producer Kaskade, raving on the other end of the park, to proclaim, "A little rain never hurt anyone!" Key word: "little." The sprinkling had subsided a half-hour later, just before Depeche Mode's Martin Gore sang, "Oh God, it's raining, but I'm not complaining. It's filling me up with new life."

To put it bluntly: That wasn't shit. On Saturday, the cloud cover was so thick that the festival's lighting reflected back down and cast an eerie hue over the grounds. Just after 9:30pm, while the Cure and Kings of Leon turned the last laps on their headlining sets, a hard rain fell and a collective "Oh shit" was uttered as the audience raced for their cars. It rained for the next 12 hours.

When I arrived at Zilker to survey the damages, the water rushing down Barton Springs was the color of coffee and parts of the Great Lawn were knee deep. Two guys who'd never heard of the Internet walked away from the main gate disappointed that they weren't going to see Not in the Face play their 11:20am set.

Had C3 tempted the gods by doubling down and gotten punished with rain? No. Weather, be it thunderstorms or unbearable heat, has proved an undiscriminating tormentor of all Central Texas music festivals. It's worth noting, however, that from 2002 until 2008 ACL took place in September and ungodly heat was the issue. Since then, it's been in October four of the last five years and rain has frequently become a concern. C3, undeterred, has already set dates for next year's ACL Fest: Oct. 3-5 and 10-12.

There's a happy ending to Sunday being rained out, and it's not the 33.3% refund that wristband holders will receive within three weeks. Many of the day's scheduled performers, despite having their festival pay guaranteed, resolved to give their fans a concert. About a dozen pop-up shows, dubbed "Refugee Fest," had fans lined up around the block at venues all over town and, suddenly, ACL began to resemble SXSW.

Atoms for Peace played ACL Live at the Moody Theater, Franz Ferdinand played Infest, Divine Fits played Parish, Noah & the Whale played the Empire Control Room, Red Baraat played the Belmont, and the Mowgli's performed all over town including a street corner benefit for the homeless.

Turns out you can stop a festival, but you can't stop the music.

› The landlord changed the locks on Club de Ville last Friday, and it has yet to reopen. A legal notice posted on the door shows a back rent balance of over $26,230.63. The Red River lounge, opened in 1997, boasts one of the prettiest stages in town with its natural rock wall patio. The closure comes just days before City Council's scheduled Thursday vote on whether Red River should be recognized as an official cultural district for its rich music club scene.

› Purchase your wristband to Fun Fun Fun Fest, Nov. 8-10, at Waterloo, End of an Ear, or Antone's Records and get a free album by any of the festival's performers, such as the Subhumans' From the Cradle to the Grave, Kurt Vile's Wakin' on a Pretty Daze, and Television's Marquee Moon. All Black Flag discs, not just the Keith Morris-sung Nervous Breakdown EP, are included in the promotion, as is the back catalog of Snoop Dogg, the former alias of Blue stage headliner Snoop Lion.

› The Sword achieved band merch perfection when Real Ale immortalized the local hard rockers with a microbrew beer called Iron Swan earlier this year. This Saturday you can get drunk on a special cask-conditioned batch with them at Rainey Street hangout the Blackheart as skate-thrash crew Ditch Witch and brutal instrumentalists Eagle Claw provide the live headbanging.

› South by Southwest has announced the first wave of acts performing at the 2014 music conference, March 11-16. The initial roster lists almost 200 acts representing about 10% of the some 2,000 performers who now showcase annually. The teaser includes national (Urge Overkill), international (Aterciopelados frontwoman Andrea Echeverri), and local notables (Boxing Lesson, OBN III's, Shakey Graves). See them all at austinchronicle.com/music and www.sxsw.com. 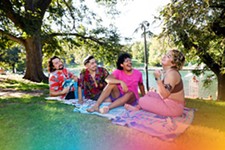 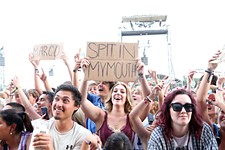