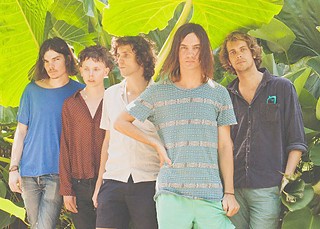 All hail psych-rock's enfants terrible. While Sam France and Jonathan Rado generated much buzz on the strength of January's modestly titled We Are the 21st Century Ambassadors of Peace & Magic (Jagjaguwar), the band's shambolic performances at SXSW left some spectators cold. Here's hoping the mercurial France's performance-related broken leg, which he sustained this summer after falling off a stage, has healed in time for redemption, ACL Fest-style. – Melanie Haupt

Though a consistent Top 10 seller in its native UK, Twickenham's Noah & the Whale has yet to garner a sizable stateside audience. That could change. New LP Heart of Nowhere strikes a clever balance between neo-folk sincerity and New Wave accessibility. Charlie Fink's personalized tunesmithery touches hearts young, old, and grizzled. – Michael Toland

Bandleader Sunny Jain can sound downright professorial when holding court on the Punjabi origins of Red Baraat, but the Brooklyn-based octet rumbles like a thundering herd of Asian elephants – all percussion and brass, no BS. With the Indian dhol drum out front, Red Baraat peddles the pulsating rhythms of Indian wedding music with a touch of New Orleans second line and D.C. go-go.
– Thomas Fawcett

North Carolina's Eric Church kicked up dust in Nashville almost immediately with his 2006 debut LP Sinners Like Me, but it was 2011's Chief that put him on top of the country charts. With enough grit and rowdiness to counter the contemporary country radio polish, Church pushes Nashville in the right direction while still rousing arena crowds, evidenced by his new live LP Caught in the Act.
– Doug Freeman

The nom de plume for Brooklyn's Matthew Houck, Phosphorescent's latest, Muchacho, has been hailed as his masterpiece. Mixing dusty alt.country with unbridled ambience and his strongest songwriting, Houck paints a world that's weary and gray yet searching for a vague sort of redemption. – Jim Caligiuri