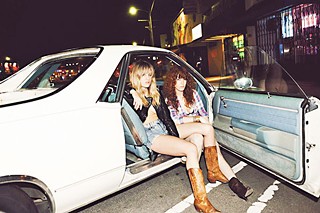 What makes "Bad for My Body," the first single from Deap Vally's upcoming debut, Sistrionix (Cherrytree), so deliciously ironic with its gleeful disavowal of "right" female behavior is that Lindsey Troy and Julie Edwards met at a crochet class. The L.A. duo demonstrate a kiss-off attitude, searing guitars, and thrashing drums which earns them a spot in the rock chick hall of fame alongside Janis and Courtney.  – Melanie Haupt

That Jordan Cook, aka Reignwolf, continues to sweep through the festival circuit without even releasing an official album serves as testament to his incomparably cathartic live show, bolstered by his blistering electric guitar. Like a one-man powerhouse of raw Black Keys blues and grit, the howling Seattle-based Canadian has rightly emerged among the next great guitar shredders. – Doug Freeman

This Cincinnati quartet refreshes sunshine pop with its self-titled LP and "Anna Sun," a vivacious single touched by melancholy. Following a set at Lollapalooza 20 and tours with Young the Giant and Fun, WTM's bright hooks and hip-shuffling rhythms look poised for a breakout. – Michael Toland

After Nineties one-hit-wonderdom with "The Freshmen," Michigan's Verve Pipe reinvented itself as a children's act. Latest LP Are We There Yet? bursts with effervescent, frequently hilarious ditties including "Homework Blues Stomp" and "I Didn't Get My Note Signed." The Pipe's penchant for classic pop hooks and lyrics that don't talk down to anybody means as good a time for parents as kids. (Also Sunday at 4:05pm) – Michael Toland

Been a long time since "Lazy Eye," but don't marginalize this L.A. quartet. Latest album Neck of the Woods landed DOA, yet they're still capable of churning honest-to-God majesty. If Billy Corgan stays defiant in his prickishness, at least Silversun Pickups are willing to pick up his slack. – Luke Winkie

The emotive indie pop of Dublin, Ireland's Little Green Cars touches on the Americana infatuations of the Lumineers or even Mumford & Sons, but with more rock. This year's debut, Absolute Zero, plays between the tensions of Stevie Appleby's nasal twinge and Faye O'Rourke's soaring, dramatic vocals that rival Florence + the Machine. – Doug Freeman

A live fixture for both the sandal-wearin', Frisbee-tossin', jam-band crowd and button-up bluegrass traditionalists, Greensky occupies a middle ground in the stylistic chasm between Yonder Mountain String Band and Del McCoury. Dave Bruzza and Paul Hoffman apply soulful singer-songwriter vox over legit picking, imbuing these Michigan natives with a rare angle that works both in the studio and on epic live jams. – Kevin Curtin

Last summer's Gossamer (Columbia), a polished and joyous-yet-hysterical reprise of Passion Pit's infectious dance-pop, was overshadowed by frontman Michael Angelakos' dealing with his bipolar disorder, but the group has rebounded gracefully. The Brooklyn-via-Boston quintet tours the dark beauty of Angelakos' autobiographical opus through November, turning his pain into a string of euphoric dance parties. – Melanie Haupt

For someone who watched his lonesome solo project blossom into Bon Iver, Justin Vernon remains delightfully unattached. The Shouting Matches is his most frivolous moment yet, a woolly, bar-blues trio composed of old friends from Wisconsin. Given that their debut carries the name Grownass Man, you know where you're at. – Luke Winkie 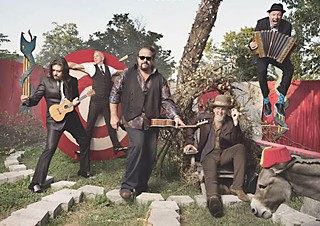 Austin's love affair with this Nashville quintet and its Southwestern twang extends back more than two decades, so when the current reunion and new disc In Time dropped at SXSW, it was time to make room in ACL's gospel tent. Raul Malo – Tex-Mex, rockabilly, bilingual – still croons like no less than Roy Orbison ("Call Me When You Get to Heaven"). – Raoul Hernandez