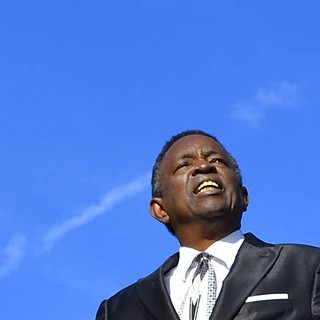 The spirit of Sixties soul runs deep on Love Is Only Everything, the third album from the Dynamites featuring Charles Walker. We spoke with veteran soul singer Walker and Dynamites guitarist/bandleader Bill Elder from their Nashville base.

Austin Chronicle: How did you come up with a direction for the new album?

Bill Elder: The first record was a real funk, powerhouse kind of thing. The second one started getting more into social consciousness, almost more of a Curtis Mayfield vibe. And this one, having worked with Charles for so many years, we really wanted to play to his strengths to the highest degree. He's such an amazing, melodic singer and balladeer.

AC: Charles, do you remember the first time you sang in public?

Charles Walker: For my first professional job, I guess I was about 16. I would go sing in this club. I would do two or three numbers and then I'd have to leave out the back door because I wasn't old enough.

BE: Charles, you should fast-forward to that story about how you went to the Apollo right after you got to New York.

CW: I met James Brown here in Nashville. All of the top acts came through Nashville. And he said that if I ever got to New York, look him up. So I moved to New York that next year [1961].

CW: Yeah, J.C. Davis was a bandleader then. And I went to the back of the Apollo, just knocked on the door, and they let me in. You would always hear, "You can't get into the Apollo. Forget about it." But somehow or another, they heard me down there and said, "Let him in!" So I went in and I got the job with J.C. Davis and James.

BE: So he bangs on the door of the Apollo and six weeks later, he's opening for James Brown on the road.