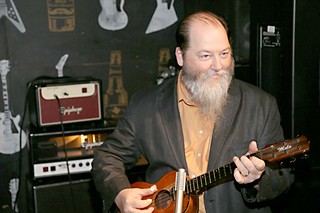 Nothing screams "Austin" more than migas with Kevin Russell at Cisco's. Best known as co-frontman of iconic Austin jokesters the Gourds, Russell blends right in at the Liars' Club table in the legendary Austin Tex-Mex breakfast joint, sitting beneath a sign that reads "Seat of Worship" while serious men in old photographs look on.

Instead of gabbing about the Gourds, Russell's reflecting on solo project Shinyribs, which has been a going concern for enough years now to legitimize it. Second LP Gulf Coast Museum came out in April and, much like the bearded, jocular man himself, spins a keen sense of place.

"I definitely try to reflect the region I live in," he says. "I think the musical influences are inescapable as well. When I first started playing Shinyribs shows, a bunch of music writers and music historians would come out to my Houston gigs and ask me, 'Did you grow up listening to swamp pop? Where did you hear this?'

"I didn't know what they were talking about. They recognized something in Shinyribs that was a regional sound or a regional feel."

Traversing the geographical space from "Floribama" to New Orleans, Houston, and Marfa, Gulf Coast Museum opens up a musicological archive of influences from its singer's Church of Christ upbringing in Beaumont. From South Texas waltz "Somebody Else" to "Song of Lime Juice and Despair," which finds the bandleader channeling Dr. John minus the voodoo, Russell cooks up a definitively Southern stew.

And because Shinyribs, whose players include Gourds drummer Keith Langford, bassist Jeff Brown, and pianist Winfield Cheek, is decidedly not the Gourds, festivalgoers shouldn't expect to hear "Gin and Juice" or anything else from that band's catalog, only material germane to Shinyribs.

"It's all me, 'spotlight on Kevin Russell now,'" he exclaims with a belly laugh and one last slug of coffee.