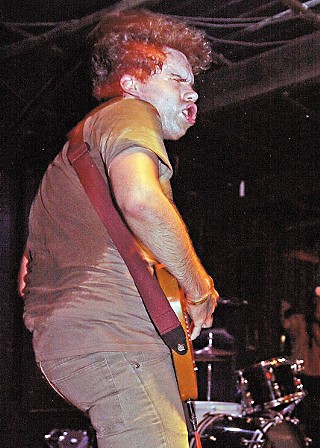 With Light Up Gold, New York's Parquet Courts started with a crateload of post-punk touchstones and emerged with a treatise in sync with the anxieties of our time. Exiled Texan guitarist/vocalist Andrew Savage spoke to us from England about the quartet's creative process.

Austin Chronicle: When did the theme of Light Up Gold begin to emerge? Was there a song that brought it together?

Andrew Savage: I'd say that the title track is the thematic centerpiece of the record.

AC: Do you tend to start with a specific song idea or do lyrics come first?

AS: Lyric writing starts just as indiscriminate writing, without structure or parameter. The difference between Parquet Courts and other songs I've done is this: The music tends to follow the words, and it makes the delivery of lyrics and melodies a bit more interesting I think.

AC: How did the band work out the song sequence for Light Up Gold? Did it take a long time?

AS: Nothing with Parquet Courts ever gets too precious. A decision is made and we move on.

AC: How is the album you're working on now different?

AS: I hope to capture some of the rawness of our earlier output, but also move forward as far as songwriting goes.

AC: Has the acclaim you've gotten for Light Up Gold put pressure on the band?

AS: I don't know if pressure is the word I would use. Really, it's just given us more enthusiasm to keep creating.

AS: One time somebody threw a bunch of snacks on stage during "Stoned and Starving." It was appreciated.

AC: What – if anything – do you miss about living in Texas?

AS: Free chips and salsa.

Check out part one of our Parquet Courts interview.