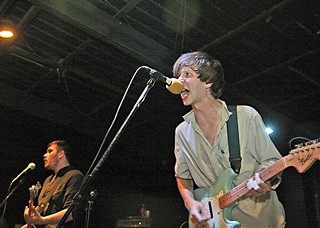 Like most addictive rock albums, Light Up Gold by Parquet Courts succeeds on ample-but-equal amounts of finger-popping familiarity and just-baked freshness. The quartet's second album ably conjures the canvas-slashing spirit of vintage Lower East Side art-punk, but their stream-of-consciousness lyrics seethe with the nervous energy of modern day post-adolescence.

"The difference between Parquet Courts and other songs I've done is this: The music tends to follow the words, and it makes the delivery of lyrics and melodies a bit more interesting I think."

Savage formed Parquet Courts in 2010 with his drummer brother Max, guitarist/vocalist Austin Brown, and bassist/vocalist Sean Yeaton. Though three of four members hail from Texas, Parquet Courts are a New York band. You can almost taste the city's clipped pace and sensory barrage in Savage's "Stoned and Starving," an aural travelogue cut from the same cloth as the Velvet Underground's "Waiting for the Man" and Jonathan Richman's "Roadrunner."

Light Up Gold was recorded in just three days. Savage calls the two-part title track the "thematic centerpiece" of the album. The warm, stripped-down sound and rapid-fire sequencing followed in short order.

"Nothing with Parquet Courts ever gets too precious," he says. "A decision is made and we move on."

Although technically released in late 2012, Light Up Gold conveniently achieved critical consensus just as this year's summer festival season kicked off. Savage says going from clubs to outdoor stages takes some getting used to.

"It can be tough commanding larger crowds, especially eclectic ones like festival audiences who may or may not be there to see you," he relates. "It's better when you play at night, which doesn't happen with us often at festivals, but when it does, the energy seems to be better."

Check out part two of our Parquet Courts interview.