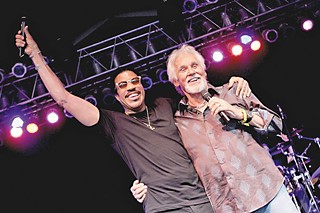 Born in 1949, Lionel Richie grew up in Tuskegee, Ala., at the height of racial tension in the Deep South.

The velvet-voiced 64-year-old lived on the campus of the Tuskegee Institute, a bubble of black intellectual and military life.

"I grew up in the rural South, but I grew up on a college campus so there was nothing rural about it at all," he recalls from his California home. "If I wanted to experience the rural South it was exactly 15 minutes in any direction outside the city limits of Tuskegee."

That bubble was bursting with an astonishing array of music, which Richie pays homage to on his latest album, Tuskegee, a duet-filled country crossover of his greatest hits.

"In my world growing up on campus, we were surrounded by gospel music because of the choir. R&B music was the music they played on the college campus. My grandmother was a classical piano instructor, and country music was on the radio. It was a melting pot of all this music, and that influenced me as to what my musical background was going to be about. When I finally got with the Commodores, I realized I was a songwriter. I did not have a clue until I got around other Motown artists and realized that they did not study music. They were guys who played by ear and wrote some of the greatest songs in the world."

Richie, of course, has written some pretty good songs of his own, enough hits to keep fans "Dancing on the Ceiling" "All Night Long."

Still, a certain subset of ACL-goers know him as Nicole Richie's dad.

"The joke is I'm bringing Nicole with me just to validate the whole thing."