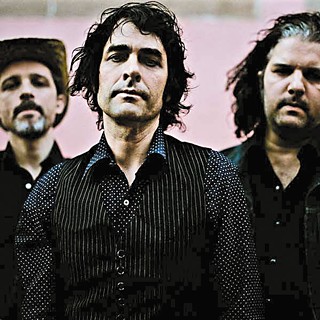 "It was only about three years where we didn't play at all," says Jon Spencer, explaining his Blues Explosion's recently broken absence. "But it's been eight years since a studio album. Meat & Bone came out last year.

"At least for me, I wanted to do different kinds of music."

Namely rockabilly, with fellow New York musician Matt Verta-Ray in the band Heavy Trash. And yet guitarist/vocalist Spencer, guitarist Judah Bauer, and drummer Russell Simins just couldn't stay away from the punk/blues juju they've whipped up since the bandleader walked away from the fuck-you garage trash of his notorious Eighties combo, Pussy Galore.

"I loosened up a little, maybe?" chuckles Spencer. "I discovered that rock & roll wasn't this terrible, horrible thing. That it wasn't totally bankrupt and it wasn't a case where there was nothing good to say about it. There's a lot of good still there, and there's a lot of good that can be found. You just have to search for it.

"The good stuff was worth cherishing and holding close and keeping it alive, instead of throwing everything away because of a few bad apples."

That difference put JSBX square in the punk/blues lineage that began with Johnny Thunders and the Gun Club, making JSBX the link to more recent practitioners like the White Stripes and Jim Jones Revue.

"You're right: There's definitely a longer history there. And it's not just white kids, either. Just look at someone like Hound Dog Taylor, or Muddy Waters! You can make the case that's a kind of blues punk! I never thought there was much of a difference between blues music and punk rock. But we weren't the first. We had some great shoulders to stand on."