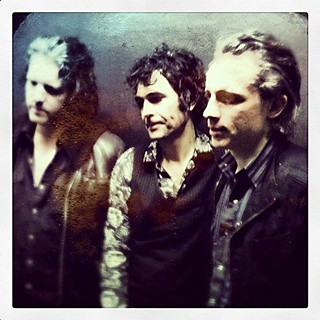 It seemed to happen out of nowhere, Meat & Bone, the Jon Spencer Blues Explosion's first disc in eight years. Their ACL tent revival of blues and punk remains invigorating as hell. Having taken time off from JSBX to explore rockabilly in Heavy Trash with Matt Verta-Ray, Spencer was eager to talk punk rock blues today.

Austin Chronicle: It's been great to see the Blues Explosion become an influence over time. The White Stripes certainly took your approach to the bank, while other recent acts like the Jim Jones Revue have clearly been influenced by you guys as well.

Jon Spencer: Maybe. I always thought the Blues Explosion was a great band, and I still think they're a great band. I think what we do is special. I can't speak to any of that other stuff, but I will say: We're a great band! [laughs]

AC: JSBX has always done well in Austin. This will probably be the biggest audience you've played before down here. How does it feel, compared to back in the Nineties, that you're doing these bigger shows now?

JS: I'm a lot older. I guess my body feels differently. The most important thing is that my love of it, the passion, is unabated. That's never changed. We still enjoy doing this, and that's why we're doing it. It still feels good, so we're gonna keep doing it. There's shifts in the audiences, and the crowds have changed a little bit, but we're still doing what we've always done: We're playing rock & roll and putting on a rock & roll show. People's desire to get together, shout, stomp their feet and share, that will never change.

Check out part one of our John Spencer Blues Explosion interview.