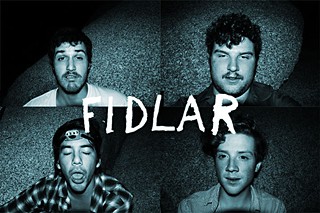 Fidlar, the L.A. skate-punk quartet whose eponymous debut took the party-boy world by storm this winter, made it quite clear that their first order of business is getting twisted beyond belief on whatever they can find. We talked to Brandon Schwartzel about what it's like to get faded on tour.

Austin Chronicle: You've been on the road nonstop since the release of your album in January. Is touring getting in the way of hanging out?

Brandon Schwartzel: That's kind of the bummer, and the thing that most people don't understand about touring bands: They actually have to get to other places and do it all over again, every day. A lot of people will invite us to house parties or other bars. It sounds awesome, but we have to get up and drive eight hours and play another show.

AC: You guys have made no bones about trying to score drugs from fans on the road. How often are you successful?

BS: We usually have a pretty easy time finding weed, because everyone smokes weed now. It's probably a good thing that it's not a high success rate with anything else, because it keeps us together. If we were getting handed tons of drugs, we'd probably be way more fucked up than we are. Every now and then we'll have a pretty trippy van ride.

AC: You're hitting the road with fellow ACLers the Orwells after this festival. They're all pretty young. Have y'all talked about ways in which you plan to corrupt their impressionable minds?

BS: We've been talking about how they'll probably be hitting us up for drinks a lot. Like, how are we going to work this? Are we going to give them a secret stash every night? They're young, but they're not reckless. They're pretty on top of their shit for how young they are.

Check out part one of our Fidlar interview.