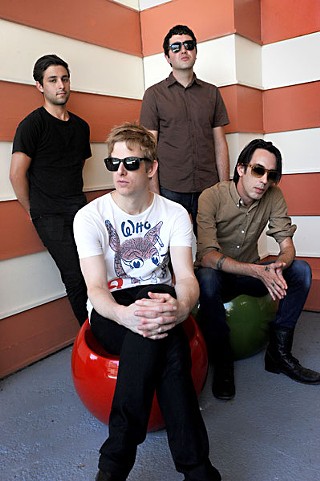 Last year, Britt Daniel made waves around Austin when he announced that he was taking a break from longtime local heroes Spoon to start a new band called Divine Fits – which promptly released A Thing Called Divine Fits and toured the country. On the eve of their own hiatus – Daniel's currently recording Spoon's eighth album here – the blonde bard talked about the importance of hitting the reset button every once in a while.

Austin Chronicle: Divine Fits was a new band with new songs that nobody had ever heard. But it also wasn't a band of no-names. Did it feel like you were starting over?

Britt Daniel: It felt very new to me. We were playing smaller rooms. I was playing with brand new people. It wasn't like the first time I went out on tour, but it was a very different scope from going out with Spoon. It's always more fun playing smaller rooms. It's easier to do a good show, and it's easier for people to really have an experience that's shared with the performer.

AC: It's been fun to watch you play bass with the Fits.

BD: It's always been my favorite instrument. It was the first instrument I ever had, until I realized that I couldn't do too much with it when I was trying to write songs and sold it for a guitar. But I've always played it a lot on [Spoon's] records. If you ask anybody who's played both, almost everybody will tell you that the bass is more fun. It's more of a feel and less of a technical instrument, and when you get to play those low notes, it just feels like power.

Check out part one of our Divine Fits interview.