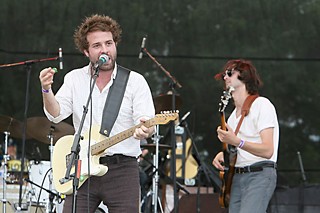 Austin Chronicle: You've been touring heavily since the new album came out. Must be nice to be young. Or are you tired yet?

Taylor Goldsmith: It's tiring, but it's part of the gig. The most living form of a song happens onstage. So therefore we get the richest experiences out of these songs on tour, not making records. Also, we're proud workaholics. I can't imagine what else we'd be doing.

AC: What are you planning on doing after the tour ends? Are you thinking of another album? And on a related note, are you able to write songs when you're on the road?

TG: All we wanna do is play shows and make records. We don't plan on taking any extended time off or exploring different projects. I write a little on tour, but it's kind of tough when you're always around others. I do most of my writing when we're not on tour, which typically are only little windows, but it works out. I've already got a few written for the next album.

AC: The test of a good song can be whether or not it's adaptable to different performance situations. How did the idea of opening and closing the new disc with different versions of "Just Beneath the Surface" come about?

TG: It really came from it feeling not quite complete without the last verse and chorus. It also seemed to explore similar ideas as most of the songs on the album – "Something in Common," "From a Window Seat," "Stories Don't End" – and for that reason we thought it would be nice to bookend the record with the song.

Check out part one of our Dawes interview.