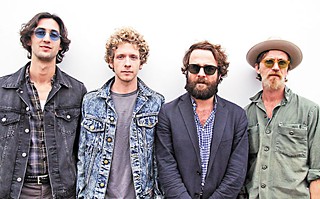 When California band Dawes taped an episode of Austin City Limits a few weeks ago, singer Taylor Goldsmith pulled one of the gutsiest moves ever recorded for television. In the middle of "When My Time Comes," he stopped singing and turned the microphone on the audience. The response was a full-throated sing-along that was electrifying. According to Goldsmith, that's not always the reaction.

"I can tell if a crowd is going to want to engage on that level," Goldsmith writes via email from Europe. "And if they don't, we just sing that chorus on our own. The feeling of a large group of people singing that section gives me the same pleasure it did the first time. The sense of communion and joy that comes from it is a constant reminder of why we do this."

The youthful quartet gets hailed for a sound that harks back to Laurel Canyon in the Seventies, with Joni Mitchell, Jackson Browne, and Crosby, Stills & Nash, only rebooted for a new century. After the release of third LP Stories Don't End, they spent part of this year opening for Bob Dylan. In the past they've worked with Browne and Robbie Robertson.

"The main thing we learned is what it looks like to dedicate your entire life to your craft. Not just several years or several albums, but a lifetime. That's one thing I always think about when people say we work hard. While I appreciate the acknowledgment, we only have three albums. Maybe I'll agree once we have 15."

On tour since the album came out in April, Goldsmith revels in being a road warrior.

"The most living form of a song happens onstage. So therefore we get the richest experiences out of these songs on tour, not making records. Also, we're proud workaholics. I can't imagine what else we'd be doing."

Check out part two of our Dawes interview.