The Evil One, Don't Slander Me, and Gremlins Have Pictures (Light in the Attic) 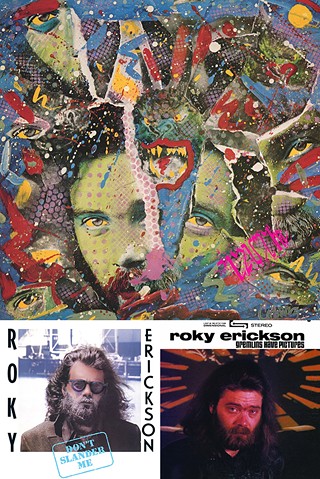 The Evil One (Light in the Attic)

Don't Slander Me (Light in the Attic)

Gremlins Have Pictures (Light in the Attic)


While Roky Erickson's pioneering output with psychedelic trailblazers the 13th Floor Elevators remains rightly celebrated for its power and originality, his subsequent solo work offers the clearest glimpse into his raging musical soul. The first three albums of Erickson's creative resurgence in the Eighties, released after a three-and-a-half-year nightmare in a maximum security mental institution, trade the Elevators' transcendental sound and impenetrable philosophy for jagged, garage-rock sonics, compact melodic craft, and cartoonishly cathartic lyrics whose lurid horror-movie imagery serve as a vivid canvas for the artist's tortured psyche. The common thread is the Austinite's feral, haunted howl making the demons and monsters he sings about all too real. While these albums have long been subject to careless repackaging, Light in the Attic's new editions – both digipak CDs and vinyl LPs, with appropriate bonus tracks and insightful liner notes by local author and music impresario Joe Nick Patoski – are definitive, presenting Erickson's most creative and productive solo period with the respect and affection it deserves. 1981's The Evil One, produced by Creedence Clearwater Revival bassist Stu Cook with the Aliens providing fiercely precise support, unleashes the mother lode. It's the disc on which Erickson comes across most clear-eyed, and the source of many of his best-loved solo songs, e.g. "Two Headed Dog," "Creature With the Atom Brain," and "Bloody Hammer," which drive home indelible hooks and unexpected turns of phrase. 1986's Don't Slander Me arrives more ragged and less focused but a grabber nonetheless, anchored by such classics as "Bermuda" and the title track, and revealing a romantic edge in the Buddy Holly pastiches "Starry Eyes" and "Nothin' in Return." The darkest horse here, and in some ways the most compelling, is the 1986 odds-and-ends mop-up Gremlins Have Pictures, whose stylistic and chronological scattering of live tracks, alternate versions, and stray songs offers a vivid, unvarnished account of Roky Erickson's singular talent and vision.