Mayantology, Imaginal Cells, and Martyrs of the Alamo 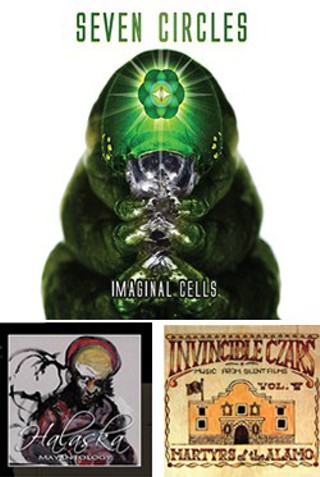 Puzzling that a town not only intensely music-centric but one that also values virtuosity hasn't spawned more progressive rock bands. Fortunately, some adventurous souls persist, encouraged by code words like "post rock" and "math rock." Halaska embodies the label on Mayantology, the local quartet's knotty, complex music borrowing as heavily from mavericks like Frank Zappa and (especially) King Crimson as it does from free jazz and self-consciously "experimental" music. Anchored by Eric Elledge's thick bass and Gonzalo Ramos' busy drumming, guitarists/singers Dieter Geisler and Logan Giles extract infectious melodies from a chaotic melange of time signatures and African-influenced axe work on the punningly labeled "Robocopulate," "Nicotine Wolf," and "Brian Emo." Seven Circles avoids obvious precedents on its debut Imaginal Cells, instead evoking the anthem dynamics, rise-and-fall arrangements, and shifting rhythmic structures of hometown heroes Explosions in the Sky. Beat keeper Russell Hudson and bassist Bryce Spears keep the momentum surging, allowing guitarist Robert Howard's battalion of effects to engulf "To Be," "Peace Love Thanks," and a clever cover of The X-Files theme with six-string tsunamis. Complex vets the Invincible Czars travel furthest afield from genre cliches, while remaining most faithful to their original impulse. Martyrs of the Alamo pulls in rock, klezmer, cowboy, and classical music into a 28-cut silent film soundtrack. Repeating motifs and variations on the same melody emphasize the LP's purpose in accompanying visuals, but the band's compositional reach and instrumental skill remains impressive throughout.