Keepin' Up With the Jones Family 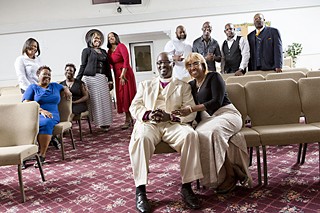 The family that prays together, stays together: The Jones Family Singers, with father Fred Jones and mother Lady Sarah seated (Photos courtesy of Arts + Labor)

September 2005: Hurricane Rita is threatening to postpone the fourth annual Austin City Limits Music Festival. At the last minute, the 180 mph winds uprooting trees near the Gulf Coast take a turn before Central Texas, and, instead of a storm, Austin gets a heat wave, with temps reaching 108 degrees. Just past noon in Zilker Park that Friday, I seek refuge from the burning sun at the only stage with a roof that extended over the public.

The program tells me that a group from Bay City called the Jones Family Singers have just come onstage. An older gentleman with a James Brown step to his drawl introduces the group as his five daughters, two sons, and a grandson. Twelve-year-old Ian Wade then kicks it off with a fierce snare; the sisters in matching lime green shirts and jean skirts start to sway as if moved by a spiritual wind. For the next hour, I'm transfixed.

A live volcano in a forest of soul, Alexis Jones rears back and erupts with all the passion a voice can hold. In an era when popular religious music often sounds like reworked Mariah Carey, this family band packs the power of vintage black church music. Past the lyrics and the fervor, all the love, here was a supernatural talent daring you, "Tell me there's not a God."

As a lifelong rock & roll fan, I'd started waking up to find the Soul Stirrers, not the Rolling Stones, the Staple Singers, not AC/DC, Sister Rosetta Tharpe, not Prince, in my CD player after a night of partying. You know, those times when you want to keep adding power and energy in that hour before the heap? The unbridled jubilation of black gospel was becoming my night-melter of choice.

I thought my chance of ever experiencing that music live had passed me by. All the greats were dead or dying. And the best new music reinforced the idea that what happens in church, stays in church. The Jones Family had been singing and playing gospel music on the Church of God in Christ circuit for over 20 years before they torched the groove fields of ACL like it was gospel night at the Apollo.

That was eight years ago, and I've seen the Jones Family Singers dozens of times since. In church and in nightclubs, at South by Southwest and ACL, at festivals in front of thousands and in big, empty rooms. These women who work fixing hair or in child-care jobs became my Pentecostal Phish. I'd drive hours to see them because they had something I needed.

Some shows were better than others. Sometimes the crowd gets into it and sometimes they don't know what to make of all that preaching. Either way, not once did the Family look like they'd rather be somewhere else. Neither was there a time when I didn't walk away feeling a little more alive.

Gospel is freedom music, evolved from songs the original African-Americans sang in the fields of the antebellum South to soothe their souls. While they couldn't sing openly about their desire to be free, slaves could rejoice in the story of Exodus, when the children of Israel yearned to be liberated from bondage. When slaves sang, "Go down Moses, way down in Egypt land/Tell old Pharaoh to let my people go," they did so with the vigor of deep personal connection.

Group patriarch Fred Jones Sr. is a bishop in the Church of God in Christ.

The "hard gospel" style of the Jones Family can be traced to the beginning of the 20th century, when "shout songs" became synonymous with the Holy Ghost possessing a soul. After the Pentecostal movement, headed by the Church of God in Christ, was born on Azusa Street in Los Angeles in 1906, churchgoers spoke in tongues, rolled in the aisles, waved their arms wildly, shouted "Hallelujah," banged on instruments, and clapped their hands in sanctified percussion.

The Jones Family Singers come out of the COGIC music tradition of Blind Willie Johnson, Sister Rosetta Tharpe, and the Edwin Hawkins Singers of "Oh Happy Day," though Bishop Fred Jones Sr. was raised a Baptist in Lake Charles, La. For nearly 30 years, he's presided over the Mount Zion COGIC in Markham, just outside Bay City, where the Family live and work day jobs. Weekend soul-saving performances give sweet release.

Beginning in the Eighties as the teenaged Sensational Zionaires, the JFS played churches in and around Houston and recorded an album with original lead singer Cynthia Fray. When she moved back to Florida with guitarist-husband Eddie Fray, the band, wanting to separate itself from all the other Zionaires in the gospel field, became the Jones Family Singers. Earlier this year, they congregated at Jim Eno's Public Hi-Fi studio and, with producers John Croslin and Eric Friend, recorded The Spirit Speaks, which comes out Tuesday.

Austin filmmaker Alan Berg (Outside Industry: The Story of SXSW), decided that his documentary on the Jones Family needed newer, higher-quality recordings than the band had made previously, hence The Spirit Speaks. Most of the CDs the JFS sell at gigs were recorded live in church.

(You Make Me Want to) Shout

Producer and Reivers frontman John Croslin had seen the JFS wreck a church at SXSW a few years earlier, but he didn't know the power of this church family until he and Friend, the former Spoon keyboardist who does a lot of musical supervision work on Mike Judge projects, went to Bay City in late 2012 to listen to the band perform at a rehearsal at Mount Zion. I sat in the back row and proudly watched the Jones Family destroy the two producers for almost two hours. Croslin had no idea they were that good and, frankly, neither did I.

It was decided to concentrate on the talents of the singers and musicians instead of trying to re-create the explosion that is the JFS live. The band can be wonderfully all over the place in concert, with Alexis and Jones Sr. both slowing down songs to make observations and the group sometimes leaping from song to song like it's an hourlong medley. Yet The Spirit Speaks contains 10 songs that each have a distinctive personality you'll want to spend time with. This is the album this group's been waiting three decades to make.

While the disc was being mastered in New York, the Jones Family volunteered its services for a Fourth of July festival in Brazoria, some 30 miles outside of Bay City. With the temperature at 103 and no shade for fans, the JFS played to a "crowd" of seven. This from an 8-foot-high stage in a field that could hold 10,000. The group put on a show as if there were people as far as the eye could see.

They sang, they danced, they vamped, and they even pulled out their encore number "(You Make Me Want to) Shout," usually reserved for when the crowd just won't leave until they hear one more. The smiles onstage were as broad as I recalled eight years earlier at ACL and although I can't speak for the other six in the audience, I can testify that, once again, they brought out chills in the triple digit heat. That's why the Jones Family remain one of the best live groups in gospel/soul music. They play for the people, yes. More importantly, they play as a family and for their Creator.

In this purity of purpose comes a simple truth: They can't be tamed, those voices reaching out to heaven's gate. The spirit can't be contained.

Both gospel and blues came from "Negro spirituals" sung in the fields to keep the misery at bay. The Jones Family and other gospel musicians point out the huge difference in the genres. The blues singer is alone in this world – nobody knows the trouble he's seen. The gospel voices are a family of faith anyone can join. You just have to believe there's a force out there greater than you. Sometimes music is all the proof you need.