The Return of ... the Cassette

Vinyl came back – can tapes be next? 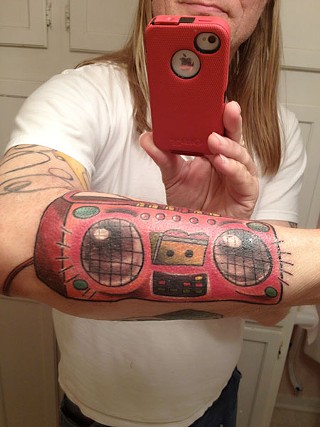 Danny Barnes, revered punk rock banjo player for Nineties locals the Bad Livers, loves cassettes. From his now longtime home in Seattle, he gets downright evangelical about his Minner Bucket Records putting out "handmade experimental music" on cassette. Like many who grew up in the Seventies, he was surrounded by tapes.

"My point of reference is a mixtape. I grew up getting 'em, making 'em, trading 'em."

He preaches the cassette gospel, embracing their practicality ("If you're a punk band in Galveston and you know you're gonna sell 25 copies of something, you can do a lot better making a tape really low-budget, then give away the download"), their place in music history ("The mixtape was the lingua franca of the punk rock weirdo"), and aesthetics ("Electric guitars on a cassette recorded really hot is one of the coolest sounds ever!")

Cassettes were once the most common prerecorded music format alongside vinyl. Their sales peaked in the Eighties after Sony introduced the Walkman, then tapered off as CDs obliterated all other musical formats through the Nineties. Barnes sees the first truly portable music format as a still-revolutionary medium for DIY music. He's not alone.

Local record stores are expanding their stock of new-release cassettes. One independent buzz label of the moment, L.A.'s Burger Records, was built on the back of cassettes. And don't look now, but September 7 marks the inaugural Cassette Store Day, celebrating all things cassette with special releases, etc.

Stop shaking your head. You humored Record Store Day right? It helps account for vinyl comprising 35% of all music sold in the first quarter of 2013.

In 1962, Dutch electronics conglomerate Phillips succeeded where RCA Victor couldn't. It introduced the "Compact Cassette" as we know it. Phillips brought them to the American market in November 1964, alongside their Norelco brand's Carry-Corder 150 recorder and player. The sound quality hardly approached the rich fidelity of the Stereo 8 cartridge (aka the 8-track tape), which was introduced by the Lear Jet Corporation also in 1964. It took until the early Seventies before cassettes caught up to 8-tracks.

The prerecorded Musicassette was similarly introduced in Europe the year the Beatles broke on Ed Sullivan, making its way here two years later. Advent introduced high-quality home stereo cassette decks in 1971, complete with Dolby B Noise Reduction (to take away that darned hiss) and the capability of playing chrome tapes with a wider dynamic range. The Sony Walkman debuted in 1979, the smaller portable player then ushering in a new era that made the 8-track obsolete and saw tapes rival vinyl in sales.

That's when cassettes catalyzed social change. Cheap to produce, durable, and easy to copy, legions of DIY punk, heavy metal, and experimental bands turned to issuing cassettes when records were beyond their budgets. Those same factors enabled underground rock and punk to be smuggled behind the Iron Curtain, spread the Ayatollah Khomeini's anti-Shah sermons through Iran before its 1979 revolution, and bring Christian and Islamic influences into traditionally Sikh and Hindu areas of Seventies India. According to the BBC, cassettes remained the primary medium for purchasing and listening to music in some developing countries until 2005.

With the first compact discs and players introduced to the North American market on March 2, 1983 (with 16 titles from CBS Records), the cassette's days would soon be numbered. Prerecorded cassette sales peaked in the late Eighties, but were on a steep downward slide through the Nineties, until most major labels finally discontinued them in 2002/2003. Dead is dead, right? Hardly.

Blank cassettes are still produced and sold, some cassette reproduction facilities remain, and players and recorders continue being manufactured.

End of an Ear's Dan Plunkett says Burger Records – currently Fullerton, California's biggest export this side of Fender Guitars and OC punk legends the Adolescents – is "the kingpin" of the cassette renaissance.

"It's cool to see their Twitter and see 15-year-old kids excited about buying cassettes online," enthuses the Foreign Mothers' frontwoman. "I'm so in love with that idea: kids tweeting about wanting to spend their allowance on cassettes."

That enthusiasm leads Burger's Lee Rickard to estimate that he and partner Sean Bohrman have sold some 10,000 tapes online since starting to release new cassettes six years ago. AllMusic puts that number at closer to 100,000 tapes worldwide. Either way, the label's known for a rough-yet-calculatedly-innocent garage punk sound reminiscent of a collision between raw DIY indies K and In the Red Records. The graphics appear handmade, like an old mixtape turned up in a sock drawer.

Recognized for acts like White Night, Nobunny, King Tuff, and Hunx & His Punx, they also count luminaries like Ty Segall, Ryan Adams, Thee Oh Sees, and Redd Kross. Burger's begun a reissue series involving classic titles like the first Adolescents LP and the Big Boys' Where's My Towel/Industry Standard (see "Reissues," Aug. 16). They also issue some vinyl and CDs, but their reputation was built on the "over 500" tapes they've released since 2008's Burger 003: Play Pretend by Thee Makeout Party!, a band Rickard and Bohrman were both in at the time.

"First and foremost, cassettes are affordable," says Rickard. "That has a lot to do with it. The turn-around is really quick. And they're physical. Kids have cars handed down to them from their parents that have tape players in them, so there's this whole vast [audience] wanting to play music in their cars, and no one's taking advantage of it. No one's releasing all these albums on cassette, even though so many people have the capacity to listen to cassettes in their cars.

Said endeavor takes them sleeping in the store they opened in 2009, mere blocks from where Leo Fender once built Stratocasters and Twin Reverbs. They have no kitchen facilities nor a shower. Rickard and Bohrman basically work 24/7 to fulfill orders and run their growing empire that includes a weekly "BRGRTV" YouTube series described as "charming nonsensical teen-noir" by The Los Angeles Times.

"Part of it is people that frequent thrift shops," opines Waterloo Records owner John Kunz. "Garage sales. There's always cool treasures to be unearthed, things from decades past, whether it's clothing, music formats, or toasters!"

"A lot of people have cassette players in their cars," says End of an Ear's Plunkett, echoing Burger Recs.

Plunkett's seen it happening for a while.

"There's several cassette labels in town, and some of them have done really well. There's a lot of noise bands, a huge metal underground that do cassettes, a lot of punk bands, electronic/experimental stuff – the whole gamut."

As for Cassette Store Day, Waterloo discovered it too late to sign up, though they'll do so next year. End of an Ear is one of four Texas stores that will participate, because "it's fun."

"I used to wonder, 'Why would you go to the store and buy a prerecorded tape?' And cassettes were huge at one time! Massive! Mine [were] always kinda underground, everyone hand-doing their J-cards."

Cassettes weren't strictly indie. Slayer's Tom Araya, while not exactly hoping for a cassette comeback, did acknowledge to the Chronicle in a 2010 interview that underground metal tape trading helped build bands like his and Metallica (revisit "Melodymaker," Sept. 24, 2010). And what of the mixtape, the Eighties cassette version of what are now playlists. MusicMania's Bernard Vasek hasn't seen hip-hop return mixtapes to tape.

"You would think in the hip-hop world, maybe. But no, it's just CD that mixtapes are out on," he says, waving at a huge, long-empty cassette rack near the Eastside emporium's cash register. "I used to carry cassettes."

Kana Harris loves cassettes. She remembers inheriting the family boombox as a child and discovering its "record" button. The Foreign Mothers' singer/guitarist learned primitive multi-tracking by introducing that boombox to her younger siblings' Fisher Price Sing-along Microphone. She loves the "romantic side" of mixtapes, and even the inherent decay in cassettes. She theorizes conspiratorially about major labels phasing out cassettes to "keep better control of their music."

Blank tape and duplicating can be handled through websites. Harris' thrift-shopping led to other discoveries.

"Churches will go out of business and sell their duplicators on Craigslist for like $75 – $200 if they're nice ones, $30 to $70 if you're trying to find a deal. Theoretically, you can get free tapes or very cheap tapes."

She estimates her Live at Beerland comp cost $1.08 per tape, including photocopying.