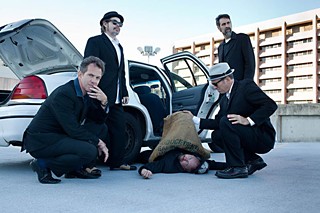 Looking for Churchwood on the map? Good luck. Though it sounds both English and exquisitely, almost soberly, small-town Southern Gothic, it doesn't show up anywhere. Except in Austin.

"The Boring White Blues Capital of the World," according to the press release, Churchwood is us. Or rather, five fearless local veterans: Bill Anderson, Joe Doerr, Julien Peterson, Adam Kahan, and Billysteve Korpi. Their sound rises in dense clouds of hard roots, the hollow thump of a leather boot heel on wooden floorboards – dust so deep in the grooves that your needle snaps off. It's white lightning, blue thunder, orange-red brimstone. Ya pays the devil yer dollar for a dance while knocking on heaven's door.

This isn't the first time Bill Anderson, 54, and Joe Doerr, 52, have teamed. That's Ballad Shambles in the late Eighties. After that, Hand of Glory, 1992. Now, another millennium ticks off, and the pair are at it again. It's like getting married to the same person for the third time.

"I'm okay with that," chuckles Doerr at the analogy, nodding with a grin to Anderson.

The two are settled into chairs in the back room of Antone's Record Shop on Guadalupe, where stacked crates of old and new vinyl and vintage posters unseen from the front of the store tell their own stories of rock & roll and the blues. Mojo and magic live in these walls, where Clifford Antone once brought R.L. Burnside, Albert Collins, and countless other guests of honor in the days when the beloved club owner's namesake venue sat across the street.

This spring, the record shop hosted the release party for 2, the quintet's third effort (revisit "Texas Platters," May 24). First came 2011's eponymous debut, then the Just the Two of Us EP a year later. Those discs set the bar high for Churchwood, whose members' résumés include Billysteve Korpi's cult blues punks the Crack Pipes, the virtuoso, post-roots eclecticism of the Invincible Czars (Kahan), and Anderson and Peterson's good old fashioned ATX weirdness, Cat Scientist. Yeow.

Churchwood also resides in that township of Austin acts imbuing their music with literary sensibility. The Gourds wandering into a Mississippi swamp, let's say, or James McMurtry on a backwoods bender. The devil might be a character in their songs or a quote from Ezra Pound.

"We forgot to put CliffsNotes with the lyrics," jokes Anderson, Billysteve Korpi's partner in guitar plunder.

Musically, Chicago runs a postwar blues current through Churchwood, but it's not all bright lights, big city. The Delta beckons, but not in the cotton fields of Mississippi. And there's a mighty blast of Texas blues without a hint of anyone named Gibbons or Vaughan.

"I started Churchwood because I wanted to play blues music again," explains Anderson. "I've been in blues bands – even Poison 13 had bluesy songs – but I didn't want it to be by the numbers. I'm not a virtuoso. And I wanted Joe, because I knew whatever music we'd come up with, he'd have words for. That's how he's always been.

"'Write about anything you want,' I told him. 'Get as surreal as you need.'"

Churchwood's 2 seethes with pent-up tension, sprung by 10 tall tales with titles like, "You Be the Mountain (I'll Be Mohammed)," "Keels Be Damned," "Weedeye," and "Money Shot Man." It's a curious hybrid of beat-poet sensibility and back porch intellectualism, writing that comes easily to Doerr, with a Ph.D. from Notre Dame and a professorship at St. Edward's University.

"It's hard to grow up in St. Louis and not be influenced by blues and jazz or William Burroughs and Chuck Berry," he says. "It made an impression on me, not so consciously, but it all just happened and began to manifest itself in certain ways. As far as I'm concerned, Churchwood is the best band I've ever been in. It's given me the platform to make the disparate elements work."

That's quite a statement from Doerr. During the mid-Eighties, he was known as Kid LeRoi, lead singer for the LeRoi Brothers. They reigned as kings of rockabilly, but he was equally noted among female fans for his Presley-like hip-shake and a winsome smile that made the girls wonder what he'd like for breakfast. It was good to be king, but Doerr had sworn to himself he wouldn't be 35 years old playing dingy Austin nightclubs.

Both he and Anderson laugh at their youthful myopia.

It's correct to lay the foundation of Churchwood on Anderson's shoulders, muscled from years playing with Poison 13, the Meat Purveyors, Big Foot Chester, and other bands that mattered. To hear him describe it, band members were chosen the way Lawrence Tierney picked his crew of colorful criminals in Reservoir Dogs, skill by skill. Anderson conceived the band with Julien Peterson in 2008, yet he and Doerr possess that classic duo dynamic of Jagger and Richards, or more apropos, Howlin' Wolf and Hubert Sumlin.

"I've been in lots of great bands," says Anderson, "but this is the first time I recruited each individual person, like putting a team together for a heist. It's not exactly what I heard in my head, but that doesn't matter. The thing about a band is, you get people together and it becomes what it will become. I knew what we did would be interesting because of the people in the band."

The front part of Antone's Record Shop is quiet, save for the Western fiddle music bouncing through the store speakers. Doerr flips through 45s. Their aged paper sleeves make a series of soft fffft noises as the vinyl discs are riffled back to back. He points wryly to the luck of the draw that places the Village People before Dinah Washington.

"That's the Buck touch," says Doerr in reference to store owner and LeRoi Brothers drummer Mike Buck, whose hardscrabble love for and impeccable taste in Texas music and vinyl makes the store a must-visit in Austin.

Anderson's face lights up as he holds up a Mississippi John Hurt album.

"This was one of my library discoveries," he says. "I'd get records from the library when I was a kid, because I didn't have any money. I grew up listening to this actual record, all the time. I don't really play like that, but I loved his guitar style and singing."

He moves around the bins to Captain Beefheart and pulls out Mirror Man, recorded in 1967, but not released until 1971. It's an odd recording, four mostly blues-rock jams, some of which was re-recorded and released on 1968's Strictly Personal. Beefheart may be the most crucial touchstone in Churchwood's collective influences, having deconstructed Bo Diddley's "Diddy Wah Diddy" in 1966 and made his place in the avant fringe, in association with Frank Zappa.

Anderson strolls to the counter, takes out his wallet, and pays the clerk for his newly acquired 42-year-old Captain Beefheart album. It'll be the last sale of the night.