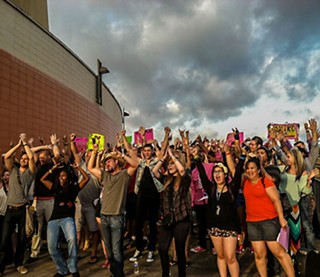 "Pick me, pick me!" American Idol hopefuls outside the Erwin Center, Aug. 7 (Photo by Kevin Curtin)

At 7am last Wednesday, while most of Austin's musicians were still in bed, thousands of hopeful young singers gathered outside the Frank Erwin Center for a fast track to stardom or a consolatory pat on the back from human tanning bed Ryan Seacrest. For the fourth time in 13 seasons, American Idol was hosting tryouts in Austin.

Shortly after the dolled-up masses were herded inside the UT basketball arena to audition, Seacrest, the show's longtime host, exited a black SUV, walked past a teenage girl holding a homemade sign reading "Deep in the Heart of Seacrest," and fielded media questions, mostly about who the judges would be this season.

"Austin's such a great music town," he repeated again and again during live interviews with local networks. When my turn came, I followed up.

"When you're in Austin, what venues do you go to to see live music?"

"I haven't been to any concerts here," he replied, quickly changing the subject by inquiring where he should lunch.

"Well, Austin's such a great barbecue town," I answered.

"Yeah, what place would you recommend?" he asked.

"I like meeting contestants at this stage and then seeing their evolution and the progress they make," he said. "They're all coming from different places with a similar aspiration and a similar dream and, hopefully, they get a chance to see it to fruition."

That reminded me why I'd come: to watch dreams die. So I posted up at the exit gates and didn't have to wait long before young girls with tear-smeared mascara, high heels in hand, and dejected guys carrying acoustic guitars – this season is the first to allow instruments – began filing out.

Open casting calls, of course, bring out the crazies. A wild-eyed gentleman in a swimsuit and raincoat vowed his "warriors in Christ" would take revenge on the judges for rejecting him. I asked him what song he had auditioned with.

Others walked out with papers in hand and smiles on faces.

"Thank God!" exclaimed an exhausted looking Midland native who'd been there since 2am. "It's been very tiring. You have to get here early and wait around, but to see the thousands of people here and be one of the ones to move ahead, it's worth it."

He explained that he writes songs for his church, but doesn't have time to perform much because he works 70 hours a week in a convenience store supporting his family. That's when I understood who American Idol's made for.

For the finale of their high-voltage KGSR Blues on the Green performance last Wednesday – played to an enormous turnout at the Austin City Limits Music Festival main stage in Zilker Park – local masters of crescendo White Denim turned up the heat with a Goliath jam on their 2009 single "I Start to Run." It became increasingly feral until singer James Petralli tossed his guitar on the ground and ran off, stage right, taking two laps around the platform before returning for one last earthquaking chord.

Just that morning, it was announced that the local foursome had completed a new album titled Corsicana Lemonade, recorded partially in Chicago under the guidance of Wilco frontman Jeff Tweedy and partially in Austin with local musician/engineer Jim Vollentine.

"It's a live-sounding record," reports Petralli. "It's just us playing together in the studio with great engineers."

All of White Denim's previous releases have been self-produced, and they've all been good, some great. None have accurately captured the euphoric heaviosity of the band's live show.

"We play a lot of notes and we play really hard, so it can be difficult to make a listenable recording out of that in the studio," acknowledges the frontman. "But if you have the right space, the right amount of time, and the right help, it's possible. Tweedy was a really great producer. He made us feel comfortable, and that's what you need to be creative." 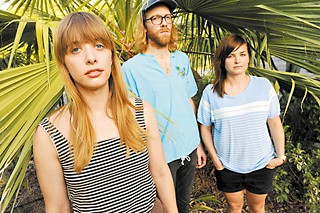 "I've learned a lot about understanding from being in this band," nods Mirror Travel's guitar-grinding vocalist Lauren Green. "I'm a more patient person than I was four years ago."

Back then, while operating under maiden name Follow That Bird, the local trio generated widespread interest when "The Ghosts That Wake You" was selected as lead single on Matador's Austin-centric Casual Victim Pile compilation. They subsequently toured with ... And You Will Know Us by the Trail of Dead and Bill Callahan. After releasing another vinyl single, they replaced their bassist, saw their indie label, Mt. Fuji, go bankrupt, abandoned an "overly polished" recording session with local producer Frenchie Smith and T.O.D.'s Conrad Keely, and retreated to the sandy West Texas town of Marfa to start over again.

"I think the style of the album was influenced by us being out there – right next to the desert," says Green.

Leaving the Panhandle feeling both accomplished and reinvented, Green, drummer Tiffanie Lanmon, and bassist Paul Brinkley ushered in their new era with a name change, ditching their Sesame Street-like moniker in favor of a more sophisticated literary reference. Lanmon told me at the time: "We chose the name seven years and two bass players ago, and you can imagine just how much has changed."

A stylish fusion of heavy garage rock and indie guitar pop capped with Green's warm, melodic vocals, Mexico may be long-overdue as a debut disc, but it's entirely worth the wait. Look for it this October on Modern Outsider, home to another female-fronted local trio, Ume. Mirror Travel opens for post-classical renegades Balmorhea outside at Mohawk on Friday.

› "Our friend will be missed," read a post on Willie Nelson's Facebook page the morning Jody Payne died. The guitarist, 77, who toured with Nelson from 1973 to 2008, passed away last Saturday due to cardiac complications. Payne was a nimble Telecaster master, whose vocals were featured on versions of "Seven Spanish Angels" and "Working Man Blues."

› South Austin's Robert Plant christened his new Twitter account by answering questions from his fans last week. The song he wished he'd written? "Hey Joe." His favorite modern bands? Low and locals the Black Angels. If he hadn't joined Led Zeppelin what career would he have chosen? Marriage counselor.

› Local power-pop quartet the Impossibles, who disbanded in 2002, then reunited for a sold-out show at Mohawk last year, are at it again, playing Fun Fun Fun Fest and recording their first new music in 12 years. Watch for a new 7-inch financed by an online crowdfunding venture, which at press time had nearly quadrupled its fundraising goal.

› Nineties radio hits come to life this Friday as Smash Mouth, Sugar Ray, Gin Blossoms, and Vertical Horizon roll through ACL Live at the Moody Theater for the Under the Sun Tour. Miles Zuniga, guitarist for the bill's only local act, Fastball, has been pulling double duty by moonlighting on bass for the Gin Blossoms. "It's nice to be in the engine room, so to speak, focused on the rhythm," says Zuniga. "But the best part is that I get to play those great songs every night."

› Ola Podrida frontman and soundtrack maestro David Wingo tells "Playback" he's now the touring bassist for his frequent collaborators Explosions in the Sky, who hit the road with Nine Inch Nails this fall.