On 2010's Marathon, Darden Smith covered terrain detailing physical and spiritual desolation in a chilling, captivating manner. In its wake, Love Calling's warmth and affection comes as a welcome surprise. Over the course of more than 25 years locally, the master song craftsman's ability to capture exquisite moments with a penetrating eye has sharpened at every turn, and that teaming here of experience and emotional resonance represents yet another plateau for him. Recording in Nashville with several fellow travelers and songwriters – Radney Foster, Jay Clementi, Gary Nicholson, Harley Allen – Smith seems especially compatible with the former on "Angel Flight," a heart-swelling portrait about the Texas Air National Guard plane that transports the bodies of Guardsmen slain in combat. In a better world, one of Smith and Foster's other co-writes, the brisk and hope-filled "Better Now," would be the follow-up to Smith's Top 10 hit "Loving Arms." The ominous "I Smell Smoke" contains Love Calling's best wordplay, all suspicious lovers and cigarettes. In an interesting twist, the CD version of the album contains two live bonus tracks recorded for SiriusXM Radio; a sultry bossa nova rendition of Bacharach/David's "Say A Little Prayer," as well as one of the first readings of the title track, a tune that became so requested it forced Smith to do a proper recording when he hadn't planned to include it in the collection at all. 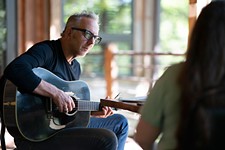 SongwritingWith:Soldiers Helps Write the War After the War
Darden Smith, Mary Gauthier, and other songwriters combat PTSD one song at a time 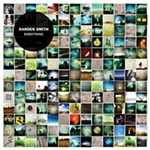